A firefighter takes a breather during the operation to put out the fire on Broga Hill Monday (Sept 16).

PETALING JAYA: A fire at Broga Hill in Semenyih was successfully extinguished after four hours on Monday (Sept 16).

"About 1.5ha of forest was burned and immediate action was taken to prevent it from spreading to the nearby areas,"he said.

"The firefighters there then used the RECEO (Rescue, Exposure, Confinement, Extinguishment, and Overhaul) method to combat the flame until it was completely extinguished.

"The operation ended at around 8.35pm Tuesday,"he said.

No victims were injured in the incident. 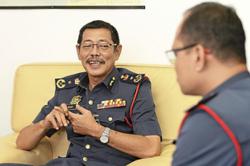 Always alert and ready to face any eventuality