More may be called up in KLIA glitch probe

PETALING JAYA: Police may be calling up more people to assist in the investigation into the disruption of the systems at the KL International Airport (KLIA).

KLIA OCPD Asst Comm Zulkifli Adamshah said police have recorded the statements of eight people so far in connection with the case.

"We are not ruling out the possibility of recording the statements of more people," he said when contacted on Monday (Sept 2).

"We are being meticulous in the case to ensure that we don't overlook any aspect.

"The case involves a lot of sophisticated and technical issues, thus allow us time to conduct the investigation," he said.

The case is classified under Section 427 of the Penal Code for damaging public property in the process of committing mischief.

Transport Minister Anthony Loke recently announced the formation of the committee to investigate the KLIA Total Airport Management System (TAMS) failure on Aug 26 following a disruption to the airport systems on Aug 21, resulting in the cancellation and delay of flights for several days.

On Aug 26, MAHB group chief executive officer Raja Azmi Raja Nazuddin reportedly said that MAHB was not ruling out the possibility that the network failure at the KLIA and KLIA2 was caused by an “act of malicious intent”.

MAHB was also reported to have lodged a police report following the systems interruption on Aug 27. 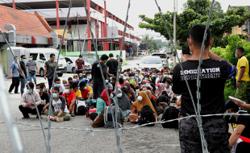