PETALING JAYA: The #AnakAnakMalaysia Walk, which is the brainchild of Datuk Chang Khim Wah and Datuk Seri Wong Chun Wai, has finally come of age since it was mooted back in 2014.The annual campaign has grown tremendously over the last five years with the unwavering support of staff from both EcoWorld Malaysia and Star Media Group, as well as participants from all walks of life.

Recalling its inception, Wong, who is Star Media Group adviser, said the walk was part of a campaign to promote moderation in Malaysia that was spearheaded by The Star.

“I have always felt that media companies must make their stand on the values that they stand for. That was how the moderation campaign started when I took over as the chief executive officer in November 2013.

“At that time, there were voices

of extremism and racialism. That’s why we need to make our stance, instil positiveness and look for

commonalities in all races and religion.

“It is easy to look for differences, but we also need to emphasise our common values, ” he said.

Following the campaign’s conception, Wong said he wanted to take it a step further.

He approached at least 50 companies, but none of them wanted to come out strongly.

“Some said they liked the idea and would support it, but with the condition that they would remain anonymous.

The Star and endorsed the idea, ” recalled Wong.

He added that it was Chang, the EcoWorld Malaysia president and CEO, who came up with the idea to name the event the #AnakAnakMalaysia Walk.

Calling the annual event a “truly a sight to behold”, Chang said it was created to encourage patriotism among fellow Malaysians during Merdeka and Malaysia Day.

“It has been five years since EcoWorld started our #AnakAnakMalaysia journey with The Star and what an adventure it has been.

“From wearing a wristband to show our love for the country, #AnakAnakMalaysia has evolved into a yearly event where thousands gather to walk together in solidarity and united as the children of Malaysia.

“It is even a highlight during Merdeka and Malaysia Day celebrations now, ” he said.

Chang said this year, the walk would be even more significant as Yang di-Pertuan Agong Al-Sultan Abdullah Ri’ayatuddin Al-Mustafa Billah Shah would be flagging off the event. 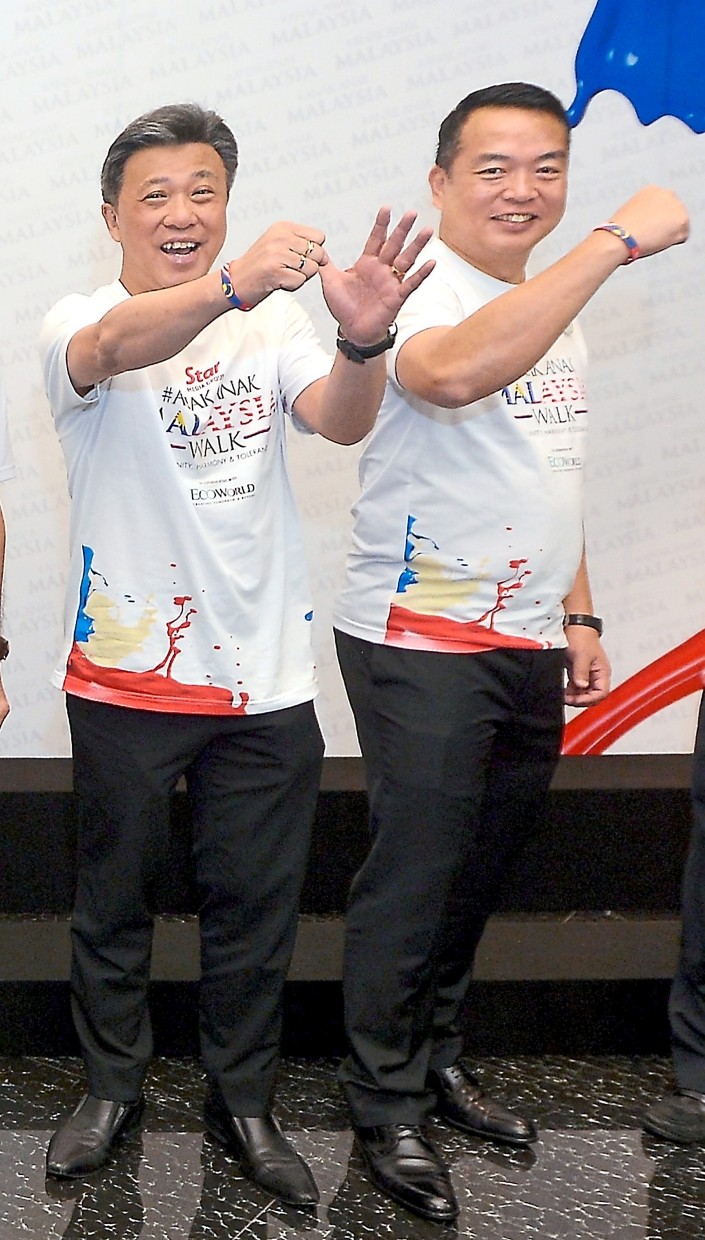 For a good cause: The #AnakAnak­Malaysia Walk is the brainchild of Wong (left) and Chang.Wong weighed in, saying that the royal presence was a big boost to the event and took it to a whole new level.

“As there is so much racial apprehension and uneasiness going on now, to have the King open and join the walk is really amazing.

“For those of us who have been working on this event since its inception, it’s really rewarding.

“But as corporate citizens, we believe that we should pursue this cause of a moderate Malaysia, ” he said.

Wong pointed out that keeping the annual event alive with new and different elements would be a challenge in the coming years.

“We should challenge ourselves to bring out different presentations.

“The testimony remains the same. We walk together as fellow Malaysians regardless of race, religion and political affiliation, ” he added.

The main sponsors for the event are Panasonic (silver sponsor) and DRB-Hicom (car sponsor).

The event will be held today from 4.30pm at the Eco Ardence Sales Gallery, Persiaran Setia Alam in Setia Alam, Shah Alam.