Malaysian motorsports’ roll out calendar of events for this year

PETALING JAYA: The Motorsports Association of Malaysia (MAM) are ready to kick off the new year with a viable calendar of events after a tumultuous 2020.

Their president Tan Sri Mokhzani Tun Mahathir said last year was a unique season for motorsports as plans had to be changed and nothing could be implemented with success or certainty.

“The business of motorsports, like every other business, were severely impacted by the Covid-19 pandemic, ” he said.

“The National Security Council (MKN), the Health Ministry and the Sports Ministry, in recognising the gravity of the situation, allowed racing to resume under strict standard operating procedures (SOP) in July.

“Racing, however, was stopped again in October due to the rising number of Covid-19 cases but resumed in December after the situation improved, ” he said.

International racing calendar were also thrown off course because of the pandemic and the Malaysia Motorcycle Grand Prix slated to be held on Oct 30-Nov 1 as well as other races in Argentina, United States and Thailand were cancelled.

The cancellation in Sepang meant local fans were deprived of their chances to watch local riders Hafizh Syahrin Abdullah, Kasma Daniel Kasmayudin and Khairul Idham Pawi as well as the Petronas Sepang Racing Team in action.

2020 was also a litmus test to the MAM who took over the national sanctioning body for motorsports from the Automobile Association of Malaysia (AAM) in July 2019. 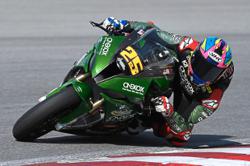