Lokman: UK firm can't confirm 'actor' is Azmin but resembles him, so he must quit

“We will do so every Saturday, starting next week, if Tun still does not fire him or ask him to resign, ” he said when met at KLIA on Wednesday afternoon (Aug 21).

Lokman had flown to the United Kingdom to try and verify the authenticity of the now-viral sex video.

According to him, the report he commissioned an England-based company to conduct showed that the two “actors” in the video resembled the photos of Haziq Abdullah Abdul Aziz and Azmin.

“They stated that for Azmin’s photo, there was nothing that did not match the videos. They can’t say that it is, in fact, Azmin; only that the photos match. “So now we want to ask the Inspector-General of Police (IGP) whether he did not provide any photos to CyberSecurity or if they cannot identify Azmin 100%, ” he said.

Lokman added that if CyberSecurity said that there was a majority match, then that would be enough for him.

“It’s strange that even after two months, the IGP has not passed the investigation paper to the Attorney General’s office.

"If he has done so, he should inform the public, ” he said.

Lokman added that such report would be used to urged the AG to take action against Azmin.

Azmin has categorically denied allegations that he was the second man in the sex video, saying it was made to tarnish his reputation and destroy his political career. 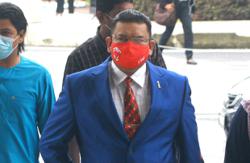