KUANTAN (Bernama): A man drowned while on an outing at the popular Pelangi Waterfalls in Sungai Lembing on Sunday morning (Aug 11).

Whilst swimming two hours later, he got into difficulties and disappeared under the water.

His friend and other visitors frantically searched for him.

"The victim’s friend said they managed to pull out the victim, who was unconscious, before calling the Fire and Rescue Department for help.

"Firemen reached the waterfall area (only) at about 12.30pm as they needed to first make the climb to the waterfalls before they brought the victim down to Lubuk Beruk, ” he told reporters later in the day.

The victim was pronounced dead by medical officers who were waiting in Sungai Lembing.

The body was then brought to the Tengku Ampuan Afzan Hospital here for a post-mortem.

The case has been classified as sudden death. – Bernama 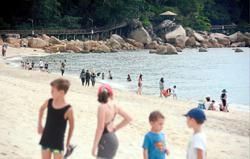