He said he accepted the explanation by the Penang government that the project was needed.

“I have heard the views of the fishermen community, the civil societies on their opposition and the explanation by the Chief Minister (Chow Kon Yeow) why the project was needed.

“I understand the state has to embark on this project as they could not get funding for the Penang Transport Master Plan (PTMP) from the Federal Government,” he said in a joint press conference with the Penang Chief Minister in Komtar yesterday.

Anwar also said he would support the state government in their request for one or two of the PTMP projects to be funded by the Federal Government.

“Maybe we do not need three islands, or rather one or two if some of the projects are funded by the Federal Government,” he added.

To a question on the protest by fishermen that they neither wanted the project nor compensation, Anwar said the fishermen must understand that certain development must take place and the fishermen’s interest would be taken care of.

The PSR project near Teluk Kum­bar is a massive plan to reclaim three islands measuring 1,800ha or the size of 3,600 football fields. 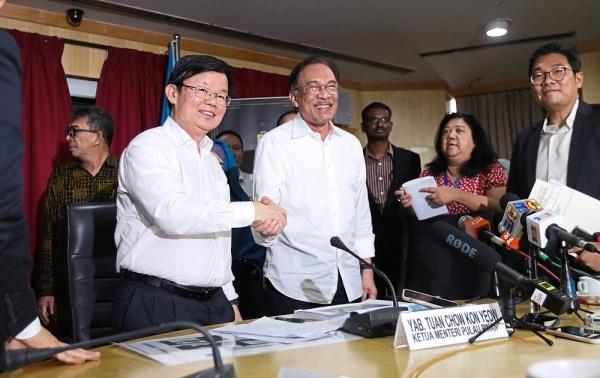 Full backing: Anwar shaking hands with Chow after a press conference on the Penang South Reclamation project at Komtar in George Town.

On July 5, the state announced that the PSR had obtained the Environmental Impact Assessment (EIA) approval with 72 conditions to be fulfilled.

The PSR is expected to generate RM70bil, of which RM46bil will be used to fund the PTMP.

Chow said the briefing was conducted by the Project Delivery Partner SRS Consortium, adding that it was an avenue for a frank discussion between the state government and the Port Dickson MP.

“We listened to Anwar and accepted his view that a fair deal should be given to the affected fishermen, which we have agreed earlier.

“We are open to the idea of scaling down the PSR if there is funding from the Federal Government for the PTMP components such as the Bayan Lepas Light Rail Transit (LRT) and Pan Island Link 1 (PIL 1).

“Probably we wouldn’t need high funding and the project could be scaled down. But it is still too early for such a move.

“The state exco which met last week had given approval to send a formal request to the Federal Government to fund both the LRT, which is a priority, and the PIL 1.

“If these projects are funded by the Federal Government, then we can look into reviewing the scale and the timeline of the PSR implementation, which is the crux of the discussion today (yesterday),” he added.

Chow said a special committee would look into the fishermen’s compensation package, including equipping them with high-powered fishing boats and other benefits.

The RM9bil LRT line will begin from Komtar in the northeast corner of the island and passes through Jelutong, Gelu­gor, Bayan Lepas and the airport before ending at the PSR.

The RM9.6bil PIL 1 is a highway project that connects Gurney Drive to the Penang International Airport.