Vital to know needs of beneficiaries

By CLARISSA CHUNG and Ashley Tang

PETALING JAYA: Social work must not be done without taking the time to understand the true needs of the target groups they are helping.

Sharing their views, five prominent social personalities in a round-table discussion also noted that social organisations or volunteers must ensure that their noble intentions should not eclipse the needs of the community they want to help.

They said this could be done if they actively engage the community they are helping to better understand their needs in order to truly benefit them.

“Within these areas, scholarships and our Enabling Academy continue to play a major impact where our foundation has made investments to scale up,” she said during the discussion held in Menara Star in conjunction with the 5th edition of Star Golden Hearts Award 2019 yesterday.

She added that the foundation also supported community projects that could ensure meaningful and sustainable outcomes for the beneficiaries.

“It is not just giving funds, but we also want to support the entity that we fund so that we can make a meaningful difference. 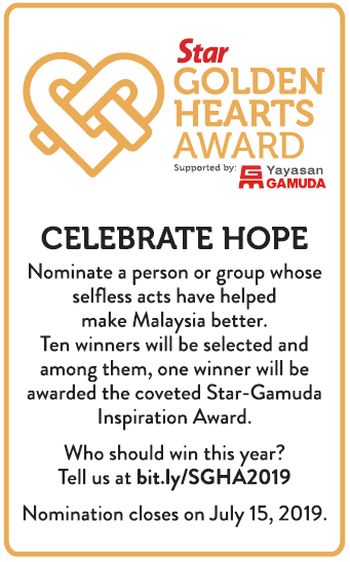 “We would prefer it to be a two-way partnership, being co-participants with the beneficiaries to do a change process,” she said.

Sharifah Alauyah said when social organisations understand the needs of their target groups better, a sense of ownership in the projects can be better developed between the do-gooders and beneficiaries.

“It has to promote self-sustainability in the lives of the beneficiaries in the long-term,” she said.

Yayasan Hasanah managing director Shahira Ahmed Bazari said their approach would be to immerse into the needs of a community before embarking on a community-based intervention project.

“Firstly, we will find out who are the community leaders, their actual needs and champions in the community who can actually help,” she said.

Shahira said it would be useful to hire someone in the community, who could lead the project, adding that a non-governmental organisation should only oversee the project.

“One of our philosophies is – doing good, do no harm – and we are always testing that. We go down and visit the projects with our partners,” she said.

Shahira pointed out that at times, some good intentions in providing for a community could result in “unintended consequences”.

NGOhub managing director Chun Wah Hoo concurred that immersing in a problem to try to understand the issues first was important to avoid a “mismatch of needs”.

“It is important to spend time to understand who are the people already in this base addressing the problem and what they have tried to do.

“I have encountered so many different issues that has this problem. With the homeless, there are a lot of people trying to help by giving food and it creates a problem of food wastage and dependency,” he said.

Star Golden Hearts Award is launched by Star Media Group in 2015 and supported by Yayasan Gamuda to celebrate and appreciate the unsung heroes in Malaysia.

The award is presented each year to 10 deserving winners – whether they are individuals, non-profit organisations or social enterprises – for their selfless acts or long-term initiatives to help others, irrespective of race, religion or background.