PETALING JAYA: Days after a baby sun bear cub was found in a condominium unit in Kuala Lumpur, The Star has discovered yet another instance of a protected animal being kept at a place of residence.This time it’s a highly protected species of eagle said to have been kept captive for a year in a cage at the compound of a house in Putra Heights in Subang Jaya here.

Following a public tip-off, The Star found the Brahminy kite or lang merah outside the corner lot terrace house.

Residents told The Star on Sunday that the bird has been in that cage for at least a year, leading some to report the matter to the authorities.

One resident said she had contacted the Department of Wildlife and National Parks Peninsular Malaysia (Perhilitan) four times in the past year to report the matter but to no avail.

The Brahminy kite is a totally protected species under the Wildlife Conservation Act 2010.

Anyone in possession of the bird can be fined up to RM100,000, jailed up to three years, or both. 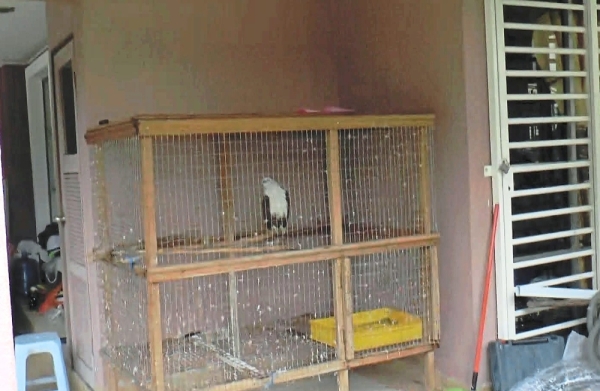 The cage which the eagle was confined in.

In 2016, The Star ran an expose showing how easy it was to buy and sell wildlife in Malaysia, especially with social media being used as the platform for transactions.

The Star’s reporter had in that year set out to buy a Brahminy kite and was able to get a bird in just two days after fewer than 20 WhatsApp messages.

The eaglet, priced at just RM600, was delivered to the point of sale – a hair salon in a shopping complex in Klang.

The Brahminy kite is a medium-­sized bird of prey in the family Accipitridae, which also includes other raptors, such as eagles, buzzards and harriers.

The aborted sale of the hatchling in 2016 was a reflection of the many illegal wildlife deals taking place in and around Malaysia, particularly the Klang Valley, no thanks to the anonymity of social media.