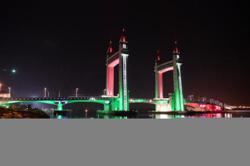 KUALA TERENGGANU (Bernama): The public can use the drawbridge connecting Kuala Terengganu and Kuala Nerus from June 2 to 17 as part of a test run on its operating system.

State secretary Datuk A Rahman Yahya said the drawbridge, the first of its kind in South-East Asia, would then be closed again to improve its operating system and is expected to be fully open by the end of June.

“We will open the bridge for testing and also for the people to use it during the upcoming Hari Raya celebrations, then we will review every aspect and expect it to be fully open in late June.

“Currently, the bridge is 99% complete. The other 1% is the finishing work such as the installation of road signage,” he said after the Terengganu state action council meeting at Wisma Darul Iman here Monday (May 20).

The construction of the drawbridge, which is yet to be named, began in August 2014, and it can be lifted for ships to pass through. - Bernama