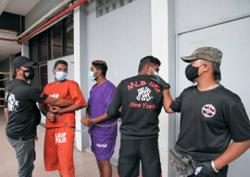 PETALING JAYA: Lawyer Arunachalam Kasi (pic) is expected to be released from prison on Tuesday (May 21).

Arunachalam, better known as Arun Kasi, had been jailed after being found in contempt of court following his statements criticising the decision in a court case.

"We got a letter from them on Friday (May 17) when I was there (at the Kajang Prison) to visit him.

"I then requested for a confirmation of his release and they issued me a letter that he will be released on May 21 around 9am," he told The Star on Saturday (May 18).

Joy said Arun looks "reasonably well under the circumstances", adding that Arun looks forward to coming out from prison.

The Federal Court sentenced Arun Kasi to 30 days' jail and fined him RM40,000 after finding him guilty of contempt of court for his two statements criticising the proceedings and decision of a court case.

Justice Ramly Ali had held that Arun Kasi's contemptuous statements against the Federal Court were serious and tarnished the good name of the judiciary, undermined public confidence in the judiciary, and ridiculed, scandalised and offended the dignity, integrity and impartiality of the court.

On Feb 27, the Federal Court allowed the Attorney General's ex-parte application for leave to initiate contempt proceedings against Arun Kasi for allegedly making criticisms in reference to an affidavit of Court of Appeal Judge Dr Abdul Hamid Abu Backer on alleged judicial misconduct in two articles published on the Aliran online portal on Feb 16 and Feb 22, 2019.

In both the articles, Arun Kasi had allegedly criticised the conduct of the proceedings by the Federal Court and the decision that was delivered on Nov 11, 2018, in the case of PCP Construction vs Leap Modulation.