PETALING JAYA: The Defence Ministry’s report on its controversial land swap deals that was made public was not properly prepared for publication.

The 59-page Governance, Procurement and Finance Investigating Committee (GPFIC) report released last week had 31 parts that were edited with the “black highlighter” feature on the PDF document.

However, many Malaysians were quick to realise that the use of a black highlighter to keep secret the identities of the companies and financial institutions involved in the

multimillion ringgit deals were easily undone with a simple copy-and-paste onto a text editor.

The ministry has since replaced the document on its website with an updated version that labels these companies “Syarikat XX”, but the unredacted copy is easily available on the Internet.

“The ministry will be releasing 16 more reports over the next few days which will be appropriately redacted,” he said.

The initial version of the report was first released on the ministry’s website after Defence Minister Mohamad Sabu tabled it in the Dewan Negara last Thursday.

The probe by the GPFIC, headed by former Auditor-General Tan Sri Ambrin Buang, revealed that lower valuation than market price, weaknesses in contract management and “outrageous” interference for political interests were among the reasons the Defence Ministry lost more than RM500mil from several land swap deals.

Liew described efforts to get to the bottom of the land swap deals as a “major achievement” by Mohamad since he became Defence Minister.

“This is the first time that such deals are being scrutinised in such detail.

“It will not only change the way the ministry operates with regard to land swap deals in the future, but also how the government operates,” he said.

The ministry is not alone in such redaction confusion. In January, lawyers acting for Paul Manafort Jr slipped up when they submitted redacted court statements that could be easily read using the copy-and-paste technique.

Manafort, who was US President Donald Trump’s campaign consultant, is now serving time for tax and bank fraud. 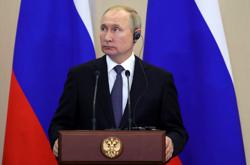