IF there was any expectation that the political rollercoaster would end after the eventful 14th General Election last year, many were in for a surprise.

Despite a smooth and peaceful takeover of the federal administration, Malaysians witnessed exciting developments in the political arena post-GE14.

One that caught a lot of attention was the defection of 13 Barisan Nasional lawmakers from Umno to the former opposition, Parti Pribumi Bersatu Malaysia.

The most shocking departure of all was probably Datuk Seri Mustapa Mohamed.

Many did not expect the Jeli MP, affectionately known as Tok Pa, to be one of the earliest politicians to jump ship.

With the defections, Bersatu’s number of seats in the Dewan Rakyat doubled from the initial 13 to 26.

PKR, meanwhile, became the party with the most seats, thanks to three Independent MPs – P. Prabakaran (Batu), Larry Sng (Julau) and Jugah Muyang (Lubuk Antu). It now commands 50 seats in the Dewan Rakyat.

Merely three months after the general election, a by-election had to be held for Selangor’s Sungai Kandis state seat, followed by six other by-elections.

Voters in Balakong, Seri Setia, Port Dickson, Cameron Highlands, Semenyih and Rantau found themselves back at polling centres in less than a year, while the campaign for the eighth by-election in Sandakan is underway with polling day set for May 11.

The most dramatic by-election would have to be Semenyih, where Barisan wrested the seat from Pakatan Harapan after Zakaria Hanafi won with 1,914 majority votes.

While Pakatan had also lost in Cameron Highlands and Rantau, the Semenyih polls marked the first time a seat switched from one party to another after GE14.

Datuk Seri Anwar Ibrahim, who was freed from prison through a royal pardon, returned to Parliament by winning the Port Dickson by-election.

But that by-election courted criticism. Like the “Kajang Move”, where the Kajang seat was vacated for his wife Datuk Seri Dr Wan Azizah Wan Ismail, the Port Dickson seat was also vacated to make way for Anwar.

The former deputy prime minister is on track to take over leadership of the country as per the agreement within Pakatan, where Tun Dr Mahathir Mohamad would be Prime Minister for two years before handing over the leadership to him.

And after running PKR for about eight years from behind bars, Anwar also officially took over the presidency of the party that he founded 20 years ago.

Meanwhile, there was turbulence in south Johor as the state had two mentris besar within the span of a year.

Post-GE14, Datuk Osman Sapian resigned as mentri besar on April 8. The move was said to have been triggered by several issues, mainly the way he handled the Pasir Gudang pollution crisis.

He was “nowhere to be found” when the crisis began and reportedly went to Batam at the height of the crisis, which had affected thousands of people.

Bukit Kepong assemblyman Datuk Dr Sahruddin Jamal took over and was sworn in as Mentri Besar on April 14. But even he was not spared from controversy despite being in office for only a few days, when his exco line-up was said to have been influenced by the Johor palace.

On the opposition front, the uncertainty over whether Barisan would continue to exist following a disastrous election performance was quelled when MCA and MIC decided to remain in the coalition.

The coalition of 13 parties was left with its original three Alliance partners – Umno, MCA, and MIC – after the rest of its member parties left.

The first to leave were the Sarawak-based parties – PBB, PRS, SUPP and PDP – followed by partners from Sabah, namely PBS, LDP, PBRS and Upko.

Shortly after, Gerakan, which was wiped out in GE14 – losing all 11 parliamentary and 31 state seats it contested – also announced that it was leaving Barisan.

MCA and MIC had voiced their intention to “move on” following racial remarks allegedly made during a by-election campaign, which caused relations to strain further in the already troubled coalition.

MCA, during its annual general assembly, had passed a resolution to dissolve Barisan.

The saying that there is no permanent friend or foe in politics could not be truer in describing the newfound friendship between Umno and PAS.

From political rivals, they have now become friends or “BFFs”. After several successful “dates”, the two decided to take their relationship to the next level.

For Umno and PAS, this means working beyond the polls on a common political platform in the interest of uniting the Muslims and Malays.

The parties held their first “ice-breaking” session in March, which was described as historic by both sides.

How successful their venture will be remains to be seen, but it will certainly not go unnoticed by their detractors.

Former prime minister Datuk Seri Najib Razak, who is facing trial for corruption, became the talk of the town with his “BossKu” catchphrase.

The term “BossKu”, which is said to have originated from Sabah, captured the imagination of Malay­sians, who included the term in every way possible in their daily conversations.

The moniker even managed to find its way into a courtroom – a witness testifying in Najib’s trial, when asked to identify him, said: “There he is. Malu apa, bossku?” to everyone’s amusement.

Malaysians can expect the political drama to drag on until the next general election, with plot twists that could make one positively giddy.

One political event that will be closely watched is the handing over of the country’s premiership from Dr Mahathir to Anwar.

Dr Mahathir has promised to pass the baton to Anwar after two years. And with one year having gone by, the million-dollar question that has everyone guessing is: “When will it happen?” 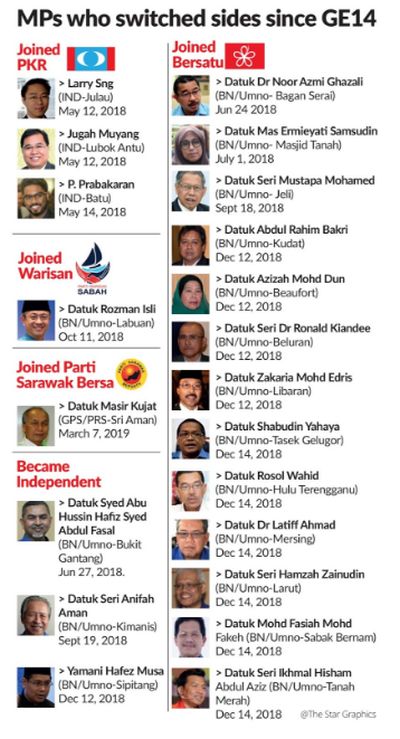