With a rebel yell: Amanah members who support Hamzah in Sandakan polls will face disciplinary action

SANDAKAN: Any Parti Amanah Negara (Amanah) member caught helping party rebel Hamzah Abdullah (pic), who is contesting as an independent candidate in the Sandakan by-election on May 11, will be subjected to disciplinary action.

This warning was issued by Sabah Amanah chairman Haris Alimudin, who said the party has ordered all its members to give their full support to DAP candidate Vivian Wong in her campaign to the Sandakan parliamentary seat.

“If any Amanah member helps or supports Hamzah, they will be subjected to disciplinary action, as provided for under our party constitution,” he said.

Meanwhile, Haris said that all programmes organised by Wong would be attended by Amanah members and its top leadership.

“We have also ordered at least 50 members to be involved every day,” he told reporters when met at the Sandakan DAP service centre on Monday (April 29).

He added that Amanah will be focusing on wooing Muslim votes because support from the Muslim community is very important in the Sandakan by-election.

Sandakan, with about 40,000 voters, has some 51% Chinese and 45% Muslim bumiputras comprising Bajaus, Suluks and Sungei, among others. The rest of the electorate is made up of the Kadazandusun communities and others.

Last August, Hamzah, who is a former Sabah Amanah chairman, said he was forced to step down from all positions in the party because some of its members refused to cooperate under his leadership.

The May 11 by-election was triggered by the death of its incumbent two-term MP Datuk Stephen Wong on March 28. 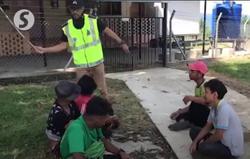