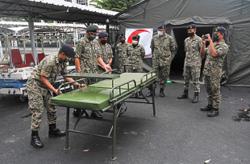 GEORGE TOWN: The long-awaited federal approvals for Penang’s mega projects are finally at hand, with the latest being for a plan to reclaim three islands that will give the state a land bank worth an estimated RM70bil.

The National Physical Planning Council (NPPC) gave the green light for the reclamation of the three islands off the southern coast of Penang island.

He said the council, chaired by Prime Minister Tun Dr Mahathir Mohamad, approved the project on 18 conditions, which he did not elaborate.

“The state will abide by the advice of NPPC and feedback from all relevant technical departments while completing the project in accordance with Section 2A(2)(b) of the Town and Country Planning Act 1976,” Chow said.

He said this project would fund economic development in the state and support the execution of the Penang Transport Master Plan.

Just a few days ago, Chow announced that the Department of Environment (DoE) had approved the Environmental Impact Assess­ment (EIA) of the Pan Island Link (PIL) 1.

The approved reclamation, dubbed Penang South Reclamation (PSR), is a project to reclaim three islands: 930ha in Island A, 445ha in Island B and 323ha in Island C.

This land bank is expected to bring in more than RM70bil for the state.

Meanwhile, congratulations are pouring in for the state government, with one of the earliest coming from the Malaysian Indian Chamber of Commerce (MICC).

MICC Penang president Datuk N. Gobalakrishnan said PIL 1 was a critical milestone for the state to create an economic land belt and make the state world-class through connectivity improvements.

“PIL 1 should go ahead as it will stimulate economic growth. It is exciting and timely,” he said.

But local NGOs said they were “shocked and disturbed”.

Consumers Association of Penang and Sahabat Alam Malaysia, in a joint statement, said they “do not know how PSR could be approved when there were huge financial, social and environmental concerns”.

They called for the 18 conditions set by NPPC to be made public.

Penang Forum steering committee member Khoo Salma Nasution wants the federal government to review the EIA approval for PIL 1 because it contains too many mistakes.

Earlier this week, Khoo highlighted technical drawings showing up to 29 berms being cut into the hillside along PIL 1’s route. (A berm is civil engineering jargon for what looks like giant staircase steps cut along hillsides beside roads.)

Public Works Department (PWD) guidelines stipulate that a hillside with a road cutting past cannot have more than six berms. If that is the case, PWD requires contractors to use other road construction alternatives such as bridges or tunnels.

“It is likely the drawings are accurate and DoE must reject the application for safety reasons,” she said.

She earned a public thank-you from Chow on Wednesday for highlighting the “technical oversight”.

Chow explained that the EIA contained only preliminary design drawings, and the next phase after EIA approval was the submission of detailed designs.