GEORGE TOWN: A waterspout was seen near the UDA low-cost flats near Tanjung Tokong in Penang on Monday (April 1).

Photos and videos of the weather phenomenon, forming out of dark storm clouds, are going viral on WhatsApp and Facebook.

In video footage, what looks like zinc sheets from nearby construction sites can be seen swirling in the skies.

Another video shows the waterspout, together with huge sea waves, heading towards land.

However, unlike in areas where vast plains meet the sea and waterspouts can reach tornado speeds, those in Penang are weak and dissipate in less than 30 minutes.

Waterspouts here generally exhibit winds of less than 30m/s, which is around 10 times less violent than tornadoes. 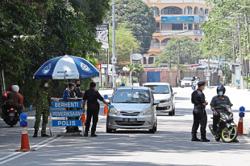