MIRI: Firefighters in Sarawak are battling wildfires that have spread to nine districts over the past 24 hours.

Multiple hotspots have been detected, with firefighters working hard to contain these fires throughout the night.

"In Bario, there are fires near the airport where people used fire to clear the area for illegal farming," he said.

More than 100 acres of forested bushland have already been razed in the Kuala Baram and Miri districts so far.

Wildfires are flaring up again as more hot weather sets in.

Many of these fires are caused by deliberate open burning by irresponsible people using fire to clear the land. 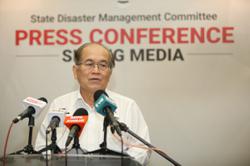