We are not ‘stupid’ or ‘stinky’

Speaking up: (from left) Rosdila, Sylvia, Rusan and other writers whose stories appear in ‘Kami Pun Ada Hak Bersekolah’ sharing their personal stories at its launch recently. — Photos from ireneyap.net

WHEN she turned 10, her dream of going to school finally came true for Nora Kantin, a Temiar from Gua Musang, Kelantan.

Even though she was older than her classmates in her Year One class, Nora was excited to learn how to read and write.

But her joy was shortlived.

Some children in the school started bullying her for being an orang asli, turning her longed-for schooling experience into a nightmare.

“Some students told me they didn’t want to be friends with me ‘because orang asli are smelly’,” says Nora.

She finally dropped out of school after she completed her Year Five. But it is something that she has always regretted, which is why Nora, now 31, is adamant that her four children should complete their schooling. 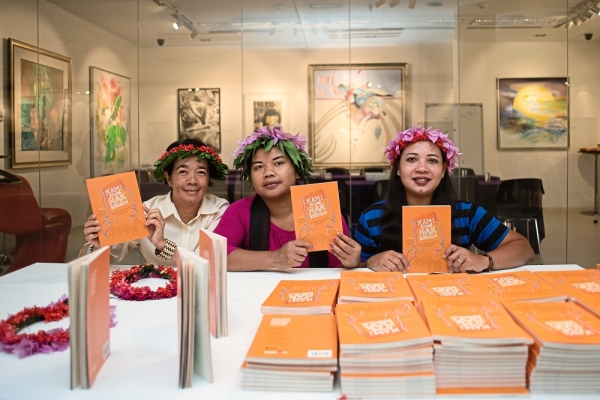 “Other than the bullying, I also felt lost in class, so I decided to leave school. But now I realise how important education is, I want my children to go as far as they can in their education,” she says.

Nora is one of 18 young orang asli women whose personal stories have been captured in a new book released in conjunction with the recent Inter-national Women’s Day titled Kami Pun Ada Hak Bersekolah: Wanita Orang Asli Bersuara (We Also Have The Right To Attend School: Orang Asli Women Speak Up).

The book is the culmination of a storytelling workshop organised by the Freedom Film Network with the support of the Konrad-Adenauer-Stiftung Malaysia and the Canada Fund for Local Initiatives.

It highlights the girls’ experiences and challenges at school. 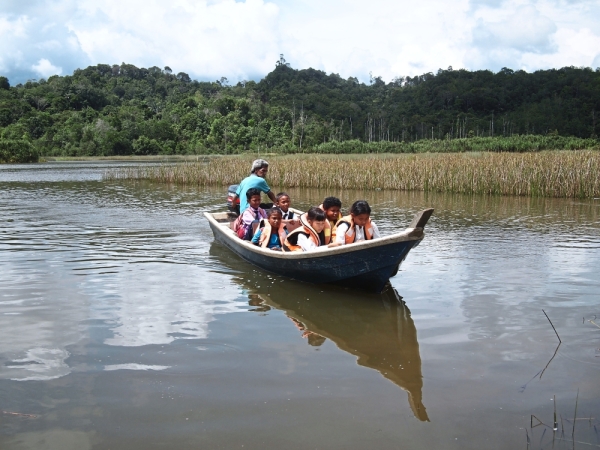 Far from school: Some orang asli children from villages near Tasik Chini, Pahang, have to take a boat to reach their school.

The participants learned how to share and express their personal stories through various art forms ranging from music, digital storytelling, and theatre, to wayang kulit and creative writing.

The book aims to amplify the voices of orang asli girls and women to spur change for the community, says one of the project’s leaders, Dr Rusaslina Idrus from the Gender Studies Programme in Universiti Malaya.

“The personal stories compiled will allow us to better understand their challenges and come up with possible solutions to provide better support for the orang asli community in Malaysia.

“The stories highlight obstacles such as poverty and lack of access to schools and proper infrastructure. Some of the stories also celebrate the tenacity and perseverance of these young women amid these challenges,” she says.

Like what Nora experienced, bullying and discrimination seemed to be a big challenge for these young women when they were at school.

Another Temiar from Gua Musang, Nabila Aris, 28, talks about how she was taunted with slurs of “stupid” and “stinky” for being an orang asli child. Eda binti Anjang, 17, from the Semai tribe in Kampung Pawong, Simpang Pulai, Perak, says her schoolmates constantly tore and scribbled on her school uniform, making her so miserable in school that she eventually dropped out.

Yaliyana Lenab, a Semelai tribeswoman from Kampung Batu Peti in Rompin, Negri Sembilan, was mocked by her schoolmates with insults like “orang asli eat frogs, monkeys and pigs”.

However, they all say what hurt most for them was that it was not only the children who bullied orang asli students. 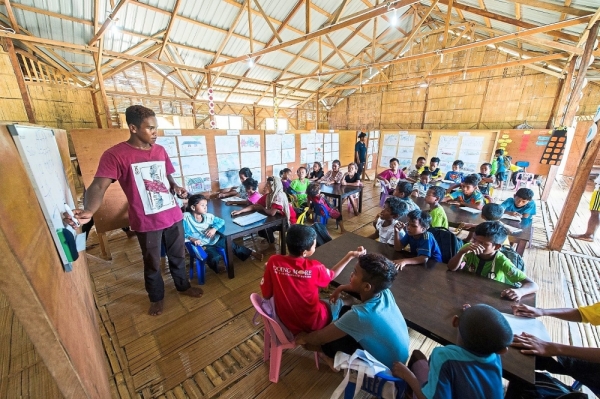 Better facilities needed:  More needs to be done to improve schools for the Orang Asli communities in the country.

“Sometimes it’s the teachers,” Nabila shares. “Some teachers were very harsh and called us rude names like ‘orang utan’.”

One teacher even said that it was easier to teach a monkey than an orang asli child, according to one story in the book.

Worse, says Yana, there were many teachers who did nothing while the other children bullied them, or ignored them in class, even when they were struggling to understand their lessons.

“When I was in secondary school there was a teacher who always ignored me and my orang asli friends. Some people said it was because she was disgusted with us for ‘eating wild boar and monkeys’!

“She was eventually sent for counselling and was disciplined for her discrimination,” says Yana.

According to the Department of Orang Asli Development (Jakoa), from 2010 to 2018, an average of 22.4% orang asli students dropped out of school between Year Six in primary school and Form One in secondary school. In 2018, the dropout rate was 17%.

In 2014, 41% of orang asli students who enrolled in Form One in 2010 dropped out before they entered Form Five. In contrast, the national dropout rate for secondary school students was only 1.36%.

“The high drop out rate among orang asli children is serious,” notes Freedom Film Network’s Brenda Danker, who co-edited the collection of stories with Rusaslina.

Danker points to the income disparity between the orang asli – comprising 18 tribes with a population of around 215,000 in peninsular Malaysia – and other communities as a major factor.

Many of the young women in the book wrote that they had to drop out of school because they were too poor or the schools were too far.

Nabila was one of them.

“I had to quit school because my father was gone, and my mother could not afford to send me to school,” she says.

Wak Suri Yok Segera is another who had to drop out of school because her family could not afford to send her to school any longer.

“We did not have enough money for school expenses or transport. My school was far from my village. When it rained, it was difficult for me to get to school as the road would be muddy, so I quit school when I was in Form Two,” says the 22-year-old Semai from Kampung Tibang in Slim River, Perak.

Sylvia Ordina Othman from the Temiar tribe in Kampung Bal RPS in Gerik, Perak, agrees that the long and often difficult journeys make many orang asli children reluctant to go to school.

“I think at least half of orang asli children today do not want to go to school. They have to wake up before sunrise to travel by bus, boat and four-wheel drive to get to their schools.

“Many have no transport and need to walk far to go to school. When the weather is bad, the journey – often through forests and over mountains – becomes even more difficult and tiring,” says Sylvia, 22.

Although Sylvia did not experience any bullying in school, she says she has friends who quit because they were not accepted by the other students in their school.

It is the same for Han Rusan Yok Lot from Kampung Ganggai in Perak.

The 19-year-old Semai, who is currently doing her Early Education diploma at a local college, says it makes a big difference when fellow students and teachers are supportive of orang asli children.

“I was very lucky to have friends who understand about orang asli and were very kind and friendly to me. They helped me with my studies and were very supportive of me, “ she says.

Contrary to common belief that orang asli parents are not aware of the importance of education or do not support their children’s schooling, Nora says many parents work hard to ensure that their children can go to school.

For most this means making sacrifices like sending their children to boarding schools from a young age – usually as young as seven years old.

“Like any other parents and children, it is difficult for them to let their children stay so far away from them, but we want them to get an education and have better lives. And vice-versa, it is difficult for the children to live on their own and far away from their family at a young age,” she says, urging the government to improve school facilities for and conditions of orang asli children.

For Rusan, it means being sent away to live with a foster family.

“When I was six years old, my parents decided to send me to live with a Chinese couple near our village. I was their seventh child, so they felt they could not afford to take care of me.”

Rusan says she owes a lot to her foster family.

“When I first went to live with them, I didn’t know how to read, so my foster mum spent a lot of time to teach me ABC and went to see my teachers to make sure I could learn properly, “ she says.

Nora laments that nothing much has changed since her schooldays as her own children are getting bullied and teased in school like she did.

“One of my sons, who is in a secondary school, tells me that bullies often try to cut his hair and rip his school shirts,” Nora says.

Acknowledging that bullying and discrimination are major problems for orang asli children, Deputy Education Minister Teo Nie Ching gave her assurance that the ministry is looking into it.

She stressed the need for love and respect in school for all students, including orang asli children.

“If the school environment is not friendly, happy, and there is no love and mutual respect for those in the school community, bullying will continue to happen,” she told reporters after reading excerpts of the book with the writers at its launch in Universiti Malaya recently.

Teo did highlight, however, that the average attendance rate for orang asli school-going students this year is promising at 87.35% – an increase of 0.21% from 2017.

When asked about the teachers who discriminate against and abuse orang asli children, Teo urged the parents and their children to lodge reports with the authorities so that they can take action against them.

“As I always say, if there is no evidence and no report, there is no way for me to go in and even investigate because if I take action without any evidence, it is unfair to those who have been complained about.”

Teo added that the ministry is aware of the issues plaguing orang asli schools and is trying to increase the number of orang asli teachers through special teacher training programmes.

Sylvia who is now a volunteer teacher at SK Segambut in Kuala Lumpur hopes to return to her village to teach soon.

“I went into education partly because of the problem of bullying, but I also learnt how important education is for us to achieve our ambitions and improve our life,” she says, adding that what many don’t realise is that like other youth in the country, young orang asli also have dreams and aspirations.

According to Teo, the Education Ministry, along with Jakoa, are looking into providing more opportunities and skills training for orang asli youth to empower them to improve their lives.

“We have a special programme that increases the chances of orang asli students attending public universities with lower academic requirements and provide other support like financial aid and scholarships, but I know there is a lot more we need to do,” said Teo.

Ultimately, what is needed is some awareness and under-standing of the orang asli community, says Yana.

“If teachers and fellow students, as well as the public at large, can understand our culture and accept us as we are, then it will help to encourage our children to go to school and stay in school.

“They can then have the opportunity to make something of themselves and help improve the lot of the orang asli community.”