Not just a laughing matter

PETALING JAYA: When it comes to the art of stand-up comedy, some people may consider it frivolous. After all, it’s just a person telling jokes, right?

But the wonderful thing about stand-up comedy is it gives a person a chance to speak out in front of an audience. This, female comedians say, is very empowering.

“We’re given an opportunity to speak. So you get women speaking about women’s issues – our personal experiences, from our own perspectives,” said comedian Niamh Spurr. 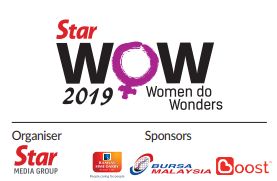 “Some people think that women comedians get on stage angry and end up bashing men. But that’s completely not true. We have a wealth of material to draw on and share,” said the Irish comedian, who is now based in Kuala Lumpur.

In Malaysia, women comedians aren’t seen or heard as much as their male counterparts, mainly because of gender stereotypes that don’t encourage women to express themselves on stage, in public.

“Many people tell me that they see a lot of funny men but not a lot of funny women. Well that’s because in Chinese families, for example, men are allowed to be expressive, and laugh loudly. But women are not supposed to. So, it’s always good to see more women in comedy. Everyone has a voice, and deserves to be heard,” she says.

Heng and Spurr will be performing their own unique style of humour during The Star’s Women do Wonders (WOW!) Fiesta at 2pm on March 17 at the Starling Mall in Petaling Jaya, Selangor this weekend.

“Comedy is very male-dominated, but that’s mostly just because there are more males (in comedy). For us, it’s about working, crafting and getting ourselves on an equal footing. We don’t want to be featured just because we’re women or just because organisers need a token spot in a comedy lineup. We want to be there because we are good,” said Astle.

For Shaq, stand-up comedy gives her the opportunity to talk about issues which most people consider sensitive.

“I’m divorced but I only started speaking about it after I got into comedy. You don’t hear many Indian women speaking about divorce, I don’t even talk about it with my family. But comedy is empowering in the sense that it tells other women that it’s okay to talk about this stuff. You’re allowed to speak up,” the Penang-based comedian said.

The Wow! Fiesta, which will take place on March 16 and 17, is part of Star Media Group’s WOW–Women do Wonders campaign to celebrate women. The Fiesta will showcase more than 80 women entrepreneurs who will be selling a wide range of products from categories such as beauty, fashion, food, education, wealth and household appliances.

There will also be talks and workshops throughout the two days including a finance talk on March 16 by celebrity entrepreneur Chui Ling titled, “Unlocking Your Financial Power”, sponsored by Bursa Malaysia Bhd and two health talks: “Keeping Abreast of Breast Health” by consultant breast and oncoplastic surgeon Dr Tan Gie Hooi (on Saturday) and “Screening Precon­cep­­tions and Beyond” by Dr Jaspal Singh Sachdev, consultant obstetrician and gynaecologist, both from ParkCity Medical Centre on Sunday.

Successful women entrepreneurs such as the founders of social enterprise The Picha Project, Ee-Lyn Tan who is the co-founder of The Accidental Bakers, and founder of fitness apparel brand Ash Be Nimble, Hui Matthews will also share their experiences of setting up their businesses in the panel talk on March 17 titled, “What No One

In Business Will Ever Tell You”.

The founders of fashion brand Mimpikita, sisters Nurul Afidah, Amirah Hanis and Fatimah Ani, and La Juiceria founder Anabelle Co-Martinent will also share their stories in the session, “Living Life On Your Own Terms”. Visitors attending the talks will be eligible for lucky draws.

Ramsay Sime Darby Health Care and Bursa Malaysia Bhd are the campaign sponsors of The Star’s WOW - Women do Wonders campaign. For details, go to http://Bit.ly/thestarwowfiesta.