KUALA LUMPUR (Bernama): Eight women, including five Vietnamese nationals, were detained in a raid at a massage parlour that was also involved in vice activities in Jalan Kuchai Lama here Monday (Feb 25).

"All eight premises have been raided twice before, this time we cut off their water supply and tore down the massage rooms," he told reporters here.

He said the women, aged between 22 and 30, were believed to have been offering sex services to their clients. - Bernama 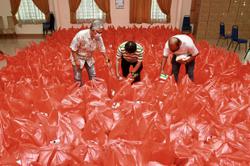