It was only last week (Feb 12) that the ban on his 2014 movie Banglasia was lifted, and now the controversial Malaysian musician and filmmaker has announced that his movie is headed for release in local cinemas next week.

Banglasia 2.0 director Namewee and producer Fred Chong conducted a press conference on Feb 20 to declare a nationwide release for their movie on Feb 28.

The movie's producers received official notification of approval from the LPF (Malaysian Film Censorship Board) on Feb 12, but Banglasia 2.0 has not been accorded Skim Wajib Tayang (Mandatory Screening Scheme) status, which means the movie is at risk of being withdrawn from the cinemas at any time.

After a six-year wait, the filmmakers say they are relieved that the movie will finally make it into cinemas although they have had to make seven cuts and do a reshoot to update the story with new scenes to make it relevant.

Speaking at the press conference, Namewee revealed that he had mixed feelings about the release due to the cuts, which he screened to media members present at the closed-door event.

"After years of uncertainty, I can't help but feel very emotional. It's a mixed feeling: I am very happy that it's finally approved, but feel really sad because I cannot screen the film in its full version as it was intended.

"However, I respect and thank LPF for its decision, because I don't want to wait another five years," said Namewee, whose real name is Wee Meng Chee.

Producer Chong is also glad that Banglasia 2.0 managed to catch the tail end of the lunar new year celebrations. "Due to the film's strong Chinese New Year and its festive connections, the ideal time to see Banglasia is now. Our run in the cinema is highly dependent on local support.

"Timing was not on our side to secure the 'Wajib Tayang' opportunity, so we urge moviegoers to catch this unique and very funny film as soon as possible."

A fast-paced action comedy tailored for the festive season, Banglasia 2.0 is a fictional tale of how Malaysians of different races unite to defend their beloved homeland against a foreign invasion with the help of a Bangladeshi worker. 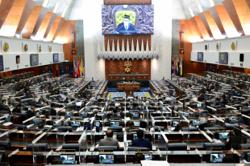