Woman of many talents

And she’s a good baker, too.

Chan Quin Er, 32, simply believes in doing things that she loves to do and giving her best.

Nevertheless, she confessed that she could not play the violin well.

She is fluent in English, Chinese and Bahasa Malaysia.

The one thing that she loves most, and does constantly, is helping people in need. She was already active in charity work as a teenager.

A good debator and a voice talent, she started emceeing at charity events and visiting poor families when she was a teenager.

She learnt what life is outside the confines of the comfort of her own home.

“I saw how a four-year-old was tasked to take care of his father who was paralysed from the neck down while his mother went out to work,” recalled Chan over a cup of coffee in Petaling Jaya on Friday.

Chan, who warms up to people quickly, showed no sign of stress although she was earlier questioned in Bukit Aman for two hours and had her handphone seized.

She was summoned by the police after she highlighted a leaked email circular by Solicitor General III Datuk Mohamad Hanafiah Zakaria instructing the Attorney General’s Chambers (AGC) to hasten the hearing of high-profile cases.

Chan, a lawyer and a former federal counsel with the AGC from 2014 to 2018, posted the circular on Facebook.

“The impartiality of the AGC is now questionable,” she said.

She highlighted the issue in her capacity as an MCA central committee member.

While she may still be new in active politics, she was well grounded way before that.

Graduating from the University of London with a law degree, Chan was also with the Territorial Army Regiment – the military reserve for the army – for two-and-a-half years.

“She told me stories of her good life in Guangdong, her pet pig and pet rooster, World War II, and how she and her father escaped to then Malaya by sea,” she said.

“She and my grandfather Chan Yew Fook, a Malaysian, had seven children.”

She described her grandmother as a strong, compassionate and far-sighted person.

Lew was a wantan noodle seller and worked hard to raise the family.

“She was very proud to own their wooden house.

“When the house had to be demolished along with others to make way for NPE, she said it was okay to make way for development,” said Chan, referring to the New Pantai Expressway.

Despite having very little, Lew would help others until her old age.

She was in her 80s when she passed away four years ago.

Lew, said Chan, knew the pain and suffering of the poor.

“Her mother died during the Japanese Occupation and her family could not even give her a burial,” she said.

The stories of a turbulent era told to Chan were “lessons on how to overcome adversities in life”.

Spending much of her first 10 years with her grandmother in a wooden house among the poor in Old Klang Road, Kuala Lumpur, had a huge influence on her.

Chan got to know many unhappy people struggling with life and she wished she had the power to turn them into happy people.

“I wanted to become a prime minister when I was a kid simply because he is so powerful.

“It was only when I was in Standard Four that I learnt I could not study to become a prime minister,” said the former SJK(C) Yoke Nam pupil, who grew up watching Tun Dr Mahathir Mohamad on TV.

At the age of eight, Chan did the flying fox in Hulu Langat, Selangor where all the other participants were teenagers.

Her father Datuk Freddy Chan and mother Datin Angie Kuo have always given her, the eldest among three siblings, support and encouragement to pursue what she wanted.

Chan’s earlier ambition was to become a doctor because a doctor can save lives.

“When I wanted to read law, my dad arranged some lawyer friends for me to talk to,” she said.

On her venturing into politics, Chan said it was sparked by a summer programme on International Political Economy at Peking University in Beijing.

The phrase “be the change you want to see” set her in motion, she said of her decision to join public service.

She was with the AGC for four years before she quit to contest the Seputeh parliamentary seat last year.

In this Year of the Pig, Chan and her husband Koh Pek Hao, 38, wish to start having children.

Describing Koh as a man of few words but strong-willed, she said he gives her the space and support to do what she wants as long as she enjoys doing it.

A baker who is good at whipping up cookies, Chan said she likes writing Chinese calligraphy and “fu” (happiness) is her favourite character. 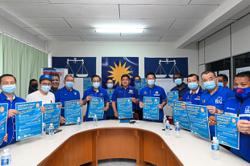 ‘Illegal entrants must be tried on mainland’