PETALING JAYA: An Ipoh-born photographer has won the bronze prize at the 2018 Tokyo Foto Awards for a photo series two years in the making that combines his love for photography and ultramarathons.

Civil engineer consultant William Cheang's photo series, titled 'To The Edge of Endurance', taken during the Bromo-Tengger-Semeru Ultra Run in Indonesia, won him the bronze prize for the Portfolio/Fine Art category.

The monochrome photos, which showed ultramarathon runners in the harsh volcanic landscape of the Bromo-Tengger-Semeru volcanic complex, captured the battle between man versus nature. "It wasn't the just humans that I wanted to shoot, but also the placement of humans in that kind of environment," Cheang, 45, told The Star.

In the photos, the wide, dramatic landscape was juxtaposed against the minuscule-looking runners, conveying the strength and enormity of nature and the persistence of mankind.

Cheang said runners had to cover a distance of up to 170km and climb an accumulated elevation of 10,000m within two days.

"When you do an ultramarathon, you are up there for 24 to 46 hours, you are basically alone by the tail end of the race... I hoped to convey that at the very end you are against yourself," he said. Cheang was first struck by the beauty of Mount Bromo in 2014 when he ran the 70km trail at the Bromo-Tengger-Semeru Ultra Run.

He heeded the mountain's call to return in 2016, and again in 2017, not as a participant but as a photographer.

To get the shot he wanted, Cheang said he sat near the volcano crater the whole day, enduring the sulphuric smoke and waited for the runners, sunlight and timing to capture the perfect shot.

"I wanted to create a photo essay for that endurance race to document what participants go through because, at that point, a lot of runners are exhausted, and pushing themselves physically and mentally to withstand the elements," he said. Cheang said he didn't know if the runners he photographed completed the 30km to 170km race that could last up to 48 hours.

"When I photographed those faces, I knew who they were but I don't know if they completed the race."

"Most mountain runners will not complete this challenging distance, but if they do, they are brought to the brink of exhaustion and at the very edge of their endurance. William Cheang, 45, has managed to combine his passion for ultramarathon running and photography.

"The photos captured them at that point where they are pushing themselves hard and strong, when their mental strength is very important," he said.

An ultramarathon runner himself, Cheang's longest run was a 150km trail spanning Switzerland and Italy. 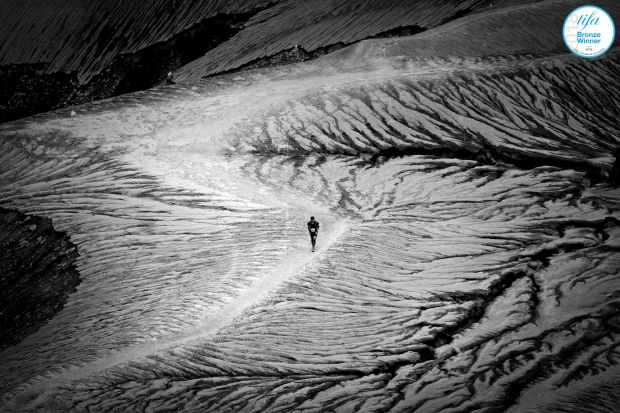 He said he hoped his winning photos would inspire those who were going through difficult moments in their lives to find the strength to push through and break personal boundaries.

"I hope the photos inspire them that they can do so much more for themselves," he said.