PETALING JAYA: The proclamation of Tengku Abdullah Sultan Ahmad Shah as Pahang’s sixth Sultan has paved the way for him to be one of the candidates for the Yang di-Pertuan Agong’s post.

“On one hand, there is respect for precedence and seniority. On the other, the discretion of the Conference of Rulers is very wide,” he said when contacted.

Citing the Federal Constitution, Dr Shad said Section 4(2) (b) in the Third Schedule reads that whenever there is a change in the Ruler of a State, then the said State shall be transferred to the end of the list.

“Bear in mind that the power of the Conference is very broad, and the guidelines given in the Cons­titution are merely guidelines,” he said.

Dr Shad said the Conference is not bound by seniority.

“So if they wish to appoint someone suitable, it is up to them, or they can follow the order of the precedence. Their decision is final,” he added.

Dr Shad said the former King Sultan Muhammad V was installed as the nation’s 15th Yang di-Pertuan Agong even though he was fresh to the throne of Kelantan.

He holds the record as the youngest to reign as the Yang di-Pertuan Agong at the age of 47.

“The Constitution does not provide strict time limits that must elapse before a Sultan, who has been newly elevated to the throne, can be appointed as the King.

“The guideline about time is in relation to the five-year term. When that is coming to an end, there is a guideline that the Conference should meet within four weeks before the term is ending, to choose the next King.

“However, in this case when there is a vacancy due to a resignation, and there is a newly elevated Sultan, there is no strict time limit.

“The Pahang Regent could be elevated as Sultan and within a few weeks, he could be appointed as the new Yang di-Pertuan Agong,” he said.

Legal expert Associate Prof Dr Shamrahayu A. Aziz said according to the Third Schedule of the Constitution, a Ruler of a state is qualified to be elected as the Yang di-Pertuan Agong.

“As long as he is a state Ruler and accepts the offer,” she said.

The Conference of Rulers will hold a special meeting on Jan 24 to choose the new King.

Rise of Tengku Abdullah as sixth Sultan of Pahang

Royal with a cool head 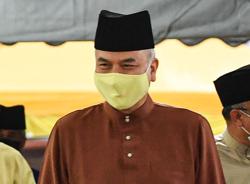