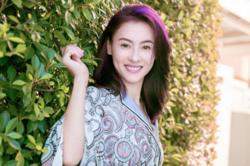 THE surprise birth of a third child by Hong Kong star Cecilia Cheung (pic) took the Internet by storm as netizens and the media feverishly debated who the father is.

Sin Chew Daily reported that the actress was linked to a Singaporean tycoon early this year and had been flying to the city-state frequently.

While the Hong Kong media speculated that the mogul could be the father of the child, their Chinese counterparts said it could be Hong Kong singer Andy Leung.

The baby boy was born at the Hong Kong Sanatorium and Hospital on Nov 25.

She has so far not disclosed the identity of her third son’s father.

> A crew member in his late 30s succumbed to injuries sustained on the set of Nezha, the movie ­produced by Taiwanese star Jay Chou, China Press also reported.

The man slipped and hit his head on the floor while on location shooting at Lihpao Racing circuit in Taichung, Taiwan.

The unconscious victim was sent to hospital but he died after being treated for about half a month.

The movie is directed by Chen Yi-xian while Chou’s wife Hannah Quinlivan, who has worked with Hollywood actor Dwayne Johnson in the movie Skyscraper, is the female lead.