SHAH ALAM: The Selangor government is committed to seeking an amicable solution to the Seafield Sri Maha Mariamman temple issue but has ruled out acquiring the land with state funds.

"The Selangor government has ruled out acquiring the land as it will incur huge financial implications to the taxpayers money and set a bad precedent for future cases,'' said Mentri Besar Amirudin Shari at a press conference on Thursday (Nov 29).

Amirudin said the state will call all interested parties for a meeting latest by next Tuesday (Dec 4).

"The Selangor government stands firm and reiterates its commitment in finding a solution within a legal framework and in accordance with the rule of law,'' said Amirudin.

According to Amirudin, the Selangor government was willing to mediate between the involved parties to reach an amicable solution.

But he reminded all parties not to resort to any activities or give comments that may cause unrest.

"The state government cautions the parties involved to remain calm, not to hold any assembly, refrain from making any forms of provocative statements and adhere to orders by the police to maintain peace and public order,'' Amirudin.

He said there were several options that were being looked at as a way to counter the issue.

Amirudin also gave his word that the temple in USJ 25, Subang Jaya, will not be demolished or subject to any legal action until an amicable solution is reached.

One of the two (opposing) temple management committees and the owners of the land on which the premises stand have been in a long drawn dispute.

The owners want the land back but the one of the temple management committees is fighting to remain at the same location.

In the pre-dawn hours on Monday (Nov 26) morning, a group of thugs attacked the temple and its devotees.

The temple caretakers called for help from their friends, and a fight resulted between the two groups.

Yesterday (Nov 28), Klang MP Charles Santiago explained that in previous mediation efforts, a solution similar to that of the temple at Mid Valley City Megamall, Kuala Lumpur was proposed, where the temple could co-exist with the proposed commercial complex.

He said that when the developer One City was owned by Malaysians, they was open to discussions.

But after the developer was taken over by Philippines-based Ayala Corporation early this year,  Charles said they didn't understand "local sensitivities" of the issue and just insisted on following a consent judgement that had been reached in 2014.

On March 11, 2014, in a consent judgement recorded in the Shah Alam High Court, it was agreed by all parties, including the temple committee, landowner One City, the Selangor state government and also the temple’s opposing committee led by M. Nagaraju, that the temple should be relocated to its new site in USJ 23, 2.7km away from the current temple. 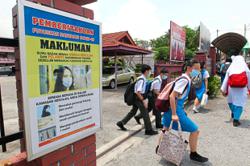