BRUSSELS: A Fifa Ethics Committee judge was arrested on suspicion of corruption in his native Malaysia and has resigned as director of an arbitration service, his lawyer and reports said Wednesday (Nov 21).

Prof Dr Sundra Rajoo (pic) was detained late Tuesday (Nov 20) by anti-graft investigators after flying in from Zurich, where Fifa has its headquarters, to assist in a corruption probe.

He was held overnight, but released after a court accepted his representatives’ arguments that he effectively has diplomatic immunity due to his high-profile legal roles, lawyer Cheow Wee told AFP.

As well as sitting on Fifa’s Ethics Committee, Rajoo was the director of the Malaysia-based Asian International Arbitration Centre.

Cheow said the Malaysian Anti-Corruption Commission (MACC) had applied to hold him for seven days as “they wanted to question him regarding a corruption allegation”.

Rajoo has been accused of using his position to gain financial favours, reports said.

Local media reported that he has now given up his position at the arbitration centre.

“My client has offered assurances that he will extend the full cooperation to MACC regarding the investigation,” his lawyer said, but added that authorities could not arrest him.

Rajoo was appointed last year as one of two deputy chairmen of the Ethics Committee’s adjudicatory chamber, which has slapped lifetime bans on several football executives named in a sprawling US Justice Department probe into football corruption. 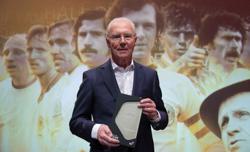