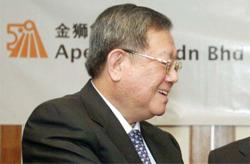 The BBC 100 Women was revealed on Monday (Nov 19), announcing its pick of 100 inspiring and influential women from around the world for 2018.

Nenney was the sole Malaysian named in the list.

"Nenney fights for the protection of Muslim women in her courts and wants to change the negative perceptions of Sharia law," BBC wrote.

Nenney made history in Malaysia last year when she was appointed one of the nation's first two female Syariah High Court judges.

She and Noor Huda Roslan were appointed as Syariah High Court judges for Selangor.

Previously, women were only appointed to the lower courts starting only in 2010.

In media interviews following her record-breaking appointment, Nenney said she is hopeful that the rising number of female judges will help change the perception that Syariah courts do not treat women fairly.

The 42-year-old graduated with a BA in Islamic Studies, a diploma in the Administration of Islamic Judiciary and Syariah, and went on to do an MA in Psychology (counselling) at Universiti Kebangsaan Malaysia (UKM).

She also worked for three years at the Syariah Judiciary Department in Putrajaya.

In the BBC 100 Women list, Nenney is named alongside other female trailblazers like Abisoye Ajayi-Akinfolarin, who founded an non-governmental organisation that teaches girls to code; 2018 Nobel Prize for Chemistry recipient Frances Arnold; Fealofani Bruun, the first Samoan and the first Pacific woman to hold the position of yacht master, and more.