Twenty-eight passengers had to wade through ankle-deep water before boading their aircraft to Subang Airport.

Some of them even removed their shoes during the 9.30am incident on Sunday (Oct 28).

“The floods were caused by unusually heavy rain, with rainfall recorded at 48mm within 90 minutes.

“We could not reposition the aircraft to another parking bay as it was nearing departure time,” he said when contacted.

After the passengers boarded their flight, Mohd Nadzim said the lounge was closed for an hour for cleaning purposes.

He said during the downpour, all the drainage and on-site detection (OSD) tanks in PIA were functioning well.

This is not the first time that Penang airport has been flooded. Previous incidents include those in Nov 2013 and July 2016. 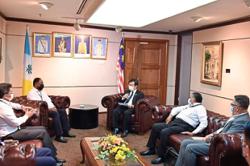