MySaveFood Secretariat head Dr Ainu Husna MS Suhaimi said the food waste not only refers to the edibles disposed of by consumers but also the post-harvest loss at farms and plantations.

MySafeFood is a project that was started in 2016 by the Malaysian Agricultural Research and Development Institute (MARDI), in collaboration with Food and Agriculture Organisation (FAO) of the United Nations, under the latter's global SaveFood initiative to reduce food waste.

Malaysians reportedly dispose of not less than 3,000 metric tonnes of food daily that is still fit for consumption, with the amount rising during festive seasons.

During Ramadan this year, SW Corp recorded a total of 615,000 metric tonnes of food waste.

Research conducted by MARDI showed that 20 percent to 50 percent of fruits and vegetables are usually discarded. This clearly shows that almost half of the yields are lost along the production chain due to poor management and failure to follow the proper specifications.

"Agricultural produce has to be free of defects in order to make it to the market. This is because of the perception among consumers that only vegetables and fruits in good condition are good for them," Ainu told Bernama, recently.

Such a perception, she added, has to be changed as fruits and vegetables with some flaws were just as edible and possess the same nutritional value as the perfectly formed ones.

Other countries like Turkey, France and Denmark are actively involved in efforts to reduce food wastage, she said.

Citing a large-scale campaign carried out by Turkey in 2013 to reduce bread waste that received the full support of the nation's president, Ainu said within a year it succeeded in reducing bread waste which resulted in savings valued at 2.8 billion Turkish Lira (RM1.9bil).  France has also been exemplary in developing policies to reduce food wastage.

"France encourages supermarkets to hand over its unsold food products, both fresh and processed, to the food bank. The total amount of food donated will be valued and given tax exemption," she said.

The Malaysian government has also started to seriously look into establishing a national-level food bank, said Ainu, adding that the Penang government's move to set up a state-level food bank was praiseworthy.

Ainu said a special framework on the setting up of food banks was expected to be developed that would serve as a reference for all those who wish to establish their own food bank.

"This is to ensure that the food goes to the target groups, that is the really needy people. The cooked food should be distributed immediately, while the timing of the distribution should be set just before the meal time," she said, adding that there were several factors that have to be taken into consideration when managing cooked food.

"We welcome efforts to set up food banks but what is more important now is for us to strive to avoid wastage at farms, restaurants, hotels and at homes."

Meanwhile, Grub Cycle – a local social enterprise – is doing its part to reduce food waste by using another approach. It collects dry foodstuffs that are nearing their expiry date and sells them at low prices to needy groups.  Grub Cycle co-founder Hawanisa Roslan said many Malaysians have misconceptions about the shelf life of food and think that a food item should be discarded if it has gone past its expiry date.

"The 'Best Before' label is there as a guide but even after that date, the food can still be consumed although its quality and freshness may have reduced.

"Then, there are those vegetables and fruits that are thrown away by the traders just because they don't 'look nice'. But the defects are just minimal and don't affect the taste and nutritional value," she said.

In its efforts to reduce food waste, Grub Cycle is trying to educate people to value food. To drive home its message, the social enterprise makes its own jam out of apples and pineapples that would otherwise end up in the garbage bin.

Hawanisa said in the three years she has been with Grub Cycle, she has observed that more Malaysians were now aware of the food waste issue and have started to do their part to reduce the level of wastage.

"Personally, I think that the authorities should take more proactive steps to ensure that food-related businesses do not continue contributing to the food's system's loss and waste statistics," she added.

Tuesday, Oct 16, is World Food Day. Malaysians should realise the value of food so that they do not end up wasting food. Remember, there are many people out there living in countries devastated by drought or war who do not have enough to eat and are dying of starvation. – Bernama 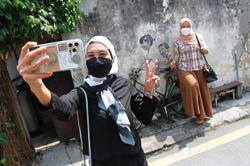