Najib vents frustration for being blamed for 'everything'

PETALING JAYA: Former Prime Minister Datuk Seri Najib Tun Razak has vented his frustration at being made the scapegoat for "everything".

"There are all sorts of wild accusations lately. It is easy for everyone to use the phrase it is all Najib's fault.

"Prices did not go down? Najib's fault."

"If it rains tomorrow and you're late for work? Najib's fault," he said in his Facebook post on Tuesday (Oct 2).

Najib posted this after he was accused of offering the seventh accused in the murder of Deputy Public Prosecutor Datuk Anthony Kevin Morais RM3.5mil to plead guilty.

He had said that the accusation to implicate him was "totally ridiculous".

He also pointed out that after the 14th General Election in May, Malaysian Anti-Corruption Commission (MACC) chief commissioner Datuk Seri Mohd Shukri Abdull had denied that Kevin Morais' murder was connected to the RM2.6bil scandal, SRC International or even 1MDB.

Hence, he said this has clearly refuted the accusations and slander made by Sarawak Report.

He had also criticised Bernama for being "mischievous" in using a "sensational tabloid-like headline for the story. 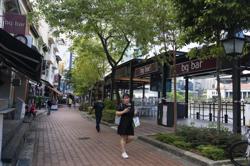