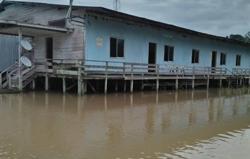 PETALING JAYA: The wife of Cradle Fund Sdn Bhd chief executive officer Nazrin Hassan, who died in a fire at his home on June 14, has been remanded as part of the murder investigation into his death.

Nazrin was found dead after being trapped in a fire on the upper floor of his house in Mutiara Damansara on June 14, with burn marks on 30 percent of his body.

Police reclassified the probe as murder under Section 302 of the Penal Code on Aug 3, following a forensic investigation report by the Fire and Rescue Department, which cited suspected foul play in the death.

It was reported that traces of petrol were found in the deceased’s room following a lab report by the department.

She said that she had been writing to the Fire and Rescue Department requesting for updates, but was told that the report by the department could not be given to her because Nazrin’s death was a high profile case.

In a statement on Aug 14, she added that she also wanted information on certain missing items and personal belongings of Nazrin, which have not been seen since the incident.

Samirah also alleged that the Fire and Rescue Department had made claims which are patently untrue, particularly that it had taken control of the premises, specifically the room where Nazrin’s death occurred, from June 14 to 19.

She said that after 5pm on June 14 itself, the family was informed that it could access the room, as well as clean the said room.

“And yet, the Fire Department produced a letter on June 19 which was backdated to the June 14. Acts of this sort which transgress established procedures erode our confidence in the authorities,” she said in her statement.

She also said that she had lodged police reports pertaining to the investigations and missing items since June.