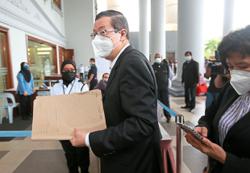 "The MACC is shocked by the decision by the Penang High Court in acquitting the former chief minister of the charges of corruption in relation to the sale of a bungalow lot and the charge of conspiring with businesswoman Phang, after the prosecution retracted the case.

"The MACC would like to stress that the decision was made by the Attorney General's office and not the MACC," it said in a statement Monday.

Earlier Monday, Lim and Phang Li Koon were acquitted over the alleged conversion of land status and the purchase of a bungalow below market value.

High Court judge Justice Hadhariah Syed Ismail acquitted both the accused and decided the charges be dropped despite the prosecution only proposing a discharge not amounting to an acquittal (DNAA).

Hadhariah, however, said both the accused will be released immediately and would not be called again for the case in future, as they are discharged amounting to acquittal.

The joint trial of Lim, who is former Penang chief minister, and Phang, was in connection to the conversion of land from agriculture to residential status, and the purchase of a plot of land and a bungalow at below market value.
Article type: metered
User Type: anonymous web
User Status:
Campaign ID: 46
Cxense type: free
User access status: 3