PETALING JAYA: The government of Nepal has barred its workers from coming to Malaysia with immediate effect.

The move comes as the Nepalese government expressed its unhappiness with “restrictive” immigration requirements its workers faced before they can be gainfully employed in this country. This includes having to go through a private company for security and medical check-ups as part of the visa requirement.

Nepal Embassy labour attache Sanmaya Ramtel confirmed that her government has indefinitely barred its citizens from seeking employment in Malaysia. The official told The Star that the government had identified several discrepancies in the recruitment process of migrant workers in Malaysia.

“The Nepalese government does not understand why the Malaysian Government is allowing a private company to monopolise the recruitment process.

“The government also feels that the company’s presence is a virtual monopoly as other companies are not allowed to carry out the screening and this contributes to higher cost for the workers,” she said.

Malaysia, the official said, was among the top two destinations for Nepalese migrant workers seeking job opportunities outside their country.

Furthermore, she said, the Gurkas from Nepal were the only category of foreign workers sought by Malaysia to work in the security line.

“This has been a long-standing dispute between the Nepalese and Malaysian governments.

“However, the change of government in Nepal which took place in February this year saw the new government taking a firm stand on the matter,” Sanmaya said.

A source from the recruitment industry told The Star that employers are now having difficulty hiring Nepali workers.

The source said the issue was over the involvement of Bestinet Sdn Bhd, which is the sole party that carries out bio-medical screening for migrant workers entering Malaysia.

It is learnt that there are currently more than 500,000 Nepalese workers in Malaysia. About 150,000 of them are hired as security guards, while the rest are involved in construction and manufacturing.

After Indonesia, Nepal is also the main supplier of migrant workers to Malaysia.

Onlinekhabar, a Nepalese news portal, reported that the Ministry of Labour, Employment and Social Security would not stop workers who are at the final stages of obtaining labour permits from flying to Malaysia.

Chirara Kannan, the owner of a consultancy service for employers, said Nepalese workers had stopped coming to Malaysia because of their government’s stand against the Malaysian Government’s policy which required migrant workers to go through Bestinet.

“The decision means migrant workers from Nepal cannot be hired by Malaysian employers since our government has endorsed Bestinet,” he said.

“Without bio-medical screening – a prerequisite for foreign workers – foreigners cannot be employed in Malaysia,” he said.

Chirara, however, said the Nepalese government felt that medical screening could be done without Bestinet.

“They feel Bestinet is a company created to monopolise the industry,” he added.

An employer who declined to be identified said the situation had affected him badly because he had exhausted the quota to bring in workers from other countries including Bangladesh and India.

“I have sufficient quota to hire Nepalese workers but am unable to do so due to the Nepalese government’s stand,” he said.

He added that the demand for Nepalese workers was also due to their good work ethics reputation.

This new development comes after The Star reported in June that Bangladeshi workers were forced to pay exorbitant amounts of money to their agents, including a syndicate which is linked to a Bangladeshi businessman with a Datuk Seri title, who is residing in Malaysia.

In an immediate response, a Bestinet spokesman said that there were 37 medical centres in Nepal accredited to perform the bio-medical screening.

These were identified, audited and selected based on their capabilities and medical facilities available, which allow medical results to be integrated and uploaded to the system in real time to the respective stakeholders (ie Malaysian Em­­bassy, Malaysian Immigration and Employers) as a compliance requirement before approvals are given.

“Such requirements are important to ensure the medical results are examined by medical practitioners following Malaysian requirements.

“Bestinet only collects RM100 for the bio-medical system which was approved by the Government, and other charges are collected by other service providers.

“We would like to state that ISC (Immigration Security Clearance), VLN (Visa Luar Negara), OSC (One Stop Centre) services are not provided by Bestinet and Bestinet is not related to the providers of these services and any Kathmandu-based agents,” the spokesman said.

He added that the company welcomed the Government’s intent to set up a committee to conduct a thorough review into all systems and service providers related to the recruitment and management of foreign workers.

Security firms in a bind over freeze on Nepali guards 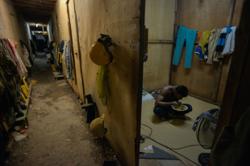