BILLIONAIRE Tan Sri Lee Kim Yew, previously shunned by many for his link with Tun Dr Mahathir Mohamad, has been receiving celebrity treatment since the May 9 general election.

Some are treating him as though he is the new premier’s representative; NGOs are seeking help from him to draw Dr Mahathir’s attention to certain issues; and businessmen are telling him their plan to organise birthday parties for the Prime Minister who just turned 93.

Chinese ambassador Bai Tian sought help from Lee to arrange for a meeting with Dr Mahathir after the latter was sworn in as the 7th Prime Minister.

The glamour days of the 1990s have returned for this man who controls Country Heights Holdings Bhd.

Fate has taken a complete turn for the better. From a “nobody” for about 15 years, he has become “somebody” again.

To most people, Lee was lucky to have bet on the right horse in Dr Mahathir, who has become Malaysia’s Prime Minister for the second time.

However, Lee insists it is a solid friendship, premised on shared values and his belief that this medical doctor could save the ill-managed country, that provided the push to stand behind Dr Mahathir.

“I am loyal to righteousness. I think whatever Mahathir does now is for the good of the country. By helping him, I think, I am helping the country. Hence, whatever help he asks from me, I will deliver as soon as possible,” says Lee in a three-hour interview at his lakeside bungalow in Seri Kembangan. 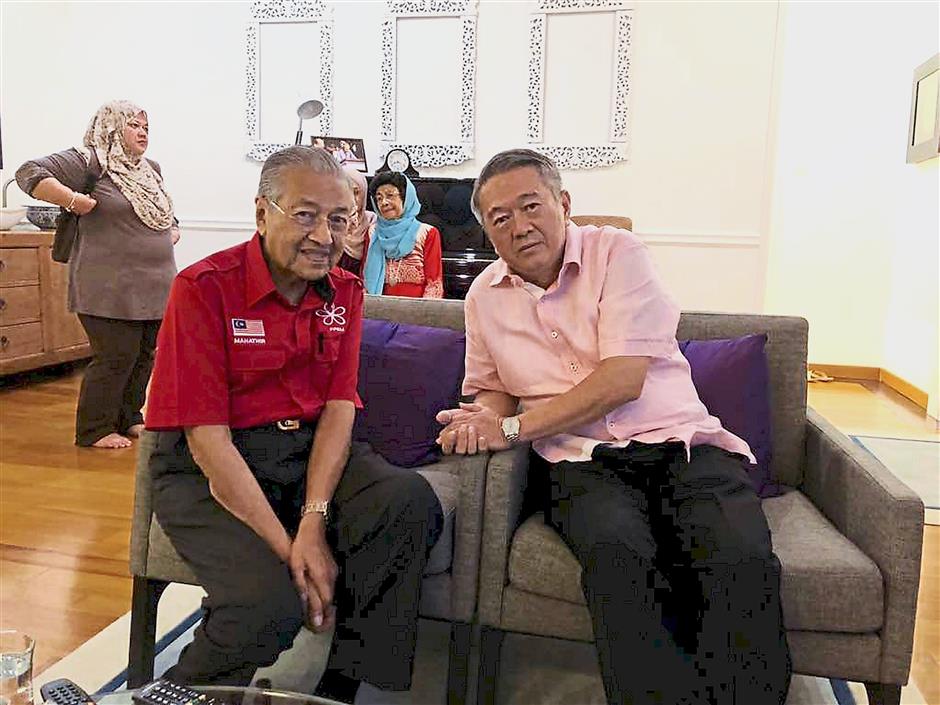 True friends: Lee says that his friendship with Dr Mahathir is solid because it is based on shared values and beliefs, not money and power.

Lee became close to Dr Mahathir after the latter bought a bungalow from Country Heights Kajang, touted as the Beverly Hills of Malaysia, in 1987 when he was premier for the first time (from 1981 to 2003).

This purchase had helped to woo the rich and powerful to Lee’s first innovative housing project, and paved the way for him to earn his first RM100mil and climb up the corporate ladder rapidly.

More wealth flowed in when the Selangor and Sarawak governments offered him large tracts of cheap unused state land for property development.

The corporate player became a market mover and shaker of the 1990s until the 1997/98 Asian financial crisis struck.

He had to rebuild his business empire after surviving the crisis, overcoming mental depression and paring down his debts.

With the appreciation of land prices, Lee estimates his asset wealth at RM5bil now.

Due to his strong holding in assets, Lee had refused to kowtow easily to “oppressive” demands from bankers and taxmen from the Inland Revenue Department (IRD).

After Dr Mahathir retired in 2003 and turned a fierce critic of his successors, Lee continued his unwavering support for the restless elderly politician.

However, many other corporate players, who had bagged large lucrative contracts and privatisation projects in the 1990s, had shunned the old man without influence.

“When you retire, you lose some friends. But Kim Yew stood by me and has been very supportive – I feel I owe him a great deal but I don’t know how to repay his help,” the then retired politician said.

During the 15 years that Dr Mahathir was ignored by many, Lee learnt that there was a price to pay for maintaining a close link with this outspoken retired politician.

“As a businessman, I began to feel the suffocation after Dr M stepped down. Country Heights was denied the opportunity to restructure its RM2.2bil debt. The taxmen raided my office, froze my local assets and personal account overseas,” Lee recounts with anger.

Indeed, the actions of IRD officers to shame him publicly for a delay in tax payment made him even more resolute to support the opposition for a change.

In late 2014, the previously apolitical Buddhist began to immerse himself in activities to support the opposition.

Ironically, this passive life member of the MCA was responsible for bringing Dr Mahathir and DAP secretary-­general Lim Guan Eng together in 2016 before a formidable opposition coalition was formed.

Fighting for Chinese support, DAP and MCA are sworn enemies in local politics.

In addition, Lim was jailed by Dr Mahathir twice during the latter’s previous rule.

“In 2016, Mahathir wanted to meet Guan Eng, so I brought Guan Eng to see him. I was deep in politics but no one knew about this,” Lee chuckles.

Just before the polls, he sponsored many seminars and rallies attended by Dr Mahathir and his daughter Datin Marina, as well as other leading activists aiming to topple the government of former prime minister Datuk Seri Najib Tun Razak.

Lee also took to writing and visiting Chinese newspapers to openly air his political views, which had caught attention as most corporate people would shy away from revealing their political stand openly.

His open letter stating that “people should be loyal to the country and Federal Constitution, and not to government leaders and political parties” went viral.

The letter was in response to statements by Najib that businessmen should be grateful to and support the ruling parties as it was the government that had created wealth opportunities for them.

Knowing the predicament businessmen were in before the polls, Lee says: “Indeed, businessmen like (Tan Sri) Tony Fernandes and (Datuk Seri) Stanley Thai should be sympathised when they were forced to do and say something to please the authorities before the polls. They should not be criticised. Under the new government, this should not happen.”

In recalling his recent “glorious acts” over a cup of pu’er tea, this Chinese-educated activist quips: “This election has helped me to improve my English a lot. I translated my articles into English and argued in English.”

Although Lee’s property business boomed during the 1990s, he is not comfortable being called “Mahathir’s crony”.

“People should study my history. While Mahathir was in power previously, he had rejected most of my business proposals, including a mobile phone project to team up with AT&T. I would have been much richer with a mobile phone licence.

“Yet, when he told me to build Cyberlodge Hotel ahead of Apec Summit in 1998, I did within the time stipulated. When he told me to get involved in Cyberjaya development, I obliged,” Lee shares.

It was also the then Prime Minister who stopped him from selling off some landed properties to a foreigner to pare down his debts during the 1998 crisis.

However, these disappointments have not undermined the Lee-Mahathir friendship.

“When Mahathir was no longer at the top, I still helped him in whatever way I can. When the Chinese community misunderstood him, I helped to clarify (the misunderstanding). I even helped him to look after his garden,” said Lee.

During those years, Lee scaled down his business activities as “there were so many obstacles in doing business”.

Now that Lee has accomplished his political objective, he is returning to the business scene properly.

“I am hoping to do bigger things in life. Venturing into bigger projects will be more exciting for a businessman in expanding his empire,” says the 64-year old from Batu Pahat, Johor.

He has personal plans to enter the oil and gas sector. Before the interview, he was talking to an oil and gas consultant.

As Lee indicated, at a recent press conference, Country Heights – which has not been actively doing business – would return to the corporate limelight.

It will embark on four property-­linked ventures, which can complement its existing business, with a combined gross development value of over RM4bil.

The group will issue RM1bil worth of sukuk (Islamic bond) to finance these projects, which will be backed by RM2bil worth of assets.

The first project will re-strategise Country Height’s current hospitality and resorts segment to lure the rich to set up a second home in Malaysia; and the second to develop a 2.5 million sq ft wellness and aesthetics hub to attract foreign companies and hospitals to build high-end apartments for medical tourism and retirement.

The third project comprises a 2 million sq ft car-show centre to showcase the latest vehicle models and accessories while the fourth will be an Islamic trade and financial centre in Malacca to provide a platform for trading in silk, tea, porcelain, jade, gold and palm oil.

“We aim to start these projects this year. They will take two to three years to complete. The four divisions will get listed separately once they are on a proper footing,” says the man who introduced medical tourism and second home for foreigners.

As some of the earlier projects Lee had planned did not take off or succeed, will these new ventures suffer a similar fate?

“I don’t think these are empty talk. I will not simply implement them if there is no fund. In the past, politics had seeped into many aspects of the business world, and I could not do much. I hope this will not happen under the new government.

“I have experienced 40 years of success and failure, I think I am wiser and more careful now,” Lee says.

But his report card has been tainted by a failed palm oil farm project, high debts, greed and over-expansion in business, and poor performance of Country Heights.

To attract investors to return to Country Heights, Lee is planning to revalue the company’s land and properties.

“The assets have never been re-valued. Once this is done, our re-valued net tangible asset should be RM10 to RM11 per share. Currently, it is only RM2.8.”

The share of Country Heights closed at RM1.29 on Thursday.

In the first quarter of this year, this medium-sized company incurred a net loss of RM2.4mil on a revenue of RM20.58mil.

Now that his good friend has become the 7th Prime Minister, will his life as a businessman get better and easier?

Says Lee: “I want to maintain my relationship with Dr M like before, but now he is the PM, with so many people surrounding him, there is a red line. But for business proposals, I will follow the proper channels to get approval.”

Although Lee has not resolved his tax issues, he will not ask for any favour from the prime minister.

“Until today, my tax is not settled yet. I want to settle my case via the judiciary system, and not through the administrative power of the PM. All I want is the return of justice to me,” said Lee.

As someone who had suffered humiliation in the past, he will champion for the amendment of “unfair tax laws”.

Despite his success, this man with a humble beginning is approachable.

Before making his foray into property development, he had been a trade apprentice, translator, salesman, and pusher of Chinese medicine and antiques.

Lee’s savings from early jobs enabled him to be a small speculator in Singapore’s booming property market from the late 1970s to early 1980s.

With over RM5 million as capital, Lee plunged into the local property market in 1985 at age 30.

The first project was developing Tan Sri Azman Hashim’s rubber estate, in which the concept of country living made him famous.

Having gone through life’s ups and downs, Lee is thankful for whatever he has now.

“Knowing Mahathir is the biggest honour in my life,” he says. 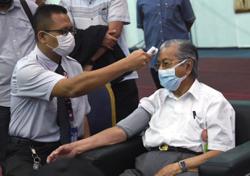