No clue about the terror next door

Closing in: Police arresting the Abu Sayyaf-linked militants at the Desa Baiduri flats in Cheras.

KUALA LUMPUR: Residents at the Desa Baiduri flats in Cheras mostly kept to themselves so it was a great surprise for them when they found out that a notorious Abu Sayyaf gunman had been living among them for two whole years.

The grounds between the 12 blocks of flats are filled with cars and motorcycles, and the shouts of children at play and grumbles of vexed mothers ring through the corridors. Here and there, pungent wafts of garbage and cat faeces can be smelled.

Up two flights of stairs at the Zamrud block, the second unit on the right is apartment ZA2-14 where Hajar Abdul Mubin had been living since 2015.

Hajar, also known as Abu Asrie, was a member of the Abu Sayyaf group based in Basilan in the Philippines before he made his way to Kuala Lumpur.

He is the nephew of Furuji Indama, leader of the Abu Sayyaf faction in Basilan.

On Tuesday, Kuala Lumpur High Court judge Mohd Sofian Abd Razak sentenced Hajar, 26, to six years’ jail from the date of his arrest for being a member of the group since 2010.

On the same day, Hajar’s brother-in-law Abdul Syamir Dabilin, 25, a Filipino, was sentenced to a three-year jail term from the date of his arrest for intentionally omitting information regarding a terrorist act, an offence under Section 130M of the Penal Code.

Syamir had photographs of Hajar together with armed Abu Sayyaf members but he failed to report them to the authorities.

But many of the residents in the flats only found out the truth about Hajar from news reports after he and seven others were arrested hours before the closing ceremony of the 29th SEA Games in August last year. Some neighbours are still unaware of the police operation on Aug 30, 2017, let alone that they had lived next door to a militant all the while.

“We all just do our own things. We get back to our homes and close the door, just like that,” said housewife Laila Ismail through a closed grille door just several steps away from Hajar’s flat.

However, Nurul Shuhada, 26, who lived across from Hajar, remembered seeing many people regularly going in and out of the flat.

“They liked to chat. When I made kerepek (crisps) outside, they liked to talk with me and asked me where my kuih (cakes) were going and things like that.

“I was surprised when I heard that those people were with the Abu Sayyaf because they were friendly to their neighbours,” said the housewife, adding she thought they were unemployed as they did not appear to be going to and from work.

The people she saw were likely Hajar’s relatives and kinsmen. He is from the Yakan ethnic group mainly found in Basilan.

According to Zulkifli Abu Talib, 57, the Yakan community in the Desa Baiduri flats tended to stick together.

“We just thought they were Sabahan. Their language isn’t Bahasa Malaysia; they spoke their own language among themselves,” said Zulkifli, a retired air force man.

He said that in the evening, they would all gather in one of their flats in a big group to eat and talk.

Before Hajar’s arrest, Zulkifli’s son had been involved in a scuffle with a group of Yakan after scolding one of their children who had used foul language on him.

The situation became violent enough that the police were called in but the dispute was settled without police reports being lodged.

“Just two weeks later, the police came. Then I found out that they were with the Abu Sayyaf,” Zulkifli said.

“All of us here were scared. We were shocked.”

After the arrests, many members of the Yakan community in the flats quietly moved out, he said.

“I don’t know where they went. They just left without even getting a (mover’s) lorry,” he said.

Sister: Militants would have killed Hajar if he stayed 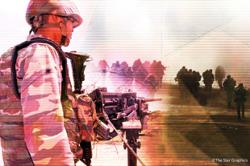