PETALING JAYA: Darell Leiking stood out for his distinctive Kadazandusun headgear during his swearing in as Minister of International Trade and Industry at Istana Negara on Monday (July 2).

Instead of wearing a songkok, he wore a siga, a traditional "headcover of handwoven cloth (kain dastar), folded or twisted in a number of distinctive ways", as described in Sabah's KadazanDusun Cultural Association (KDCA) website.

Leiking is the Member of Parliament of Penampang (a town near Kota Kinabalu), which is considered the hub of KadazanDusun culture. It is here that the state's biggest Kaamatan Harvest Festival celebrations are held.

Leiking is the deputy president of Parti Warisan Sabah and has been vocal on pushing for Sabah's state rights, as enshrined in the Malaysia Agreement of 1963. He won his seat in the 2018 elections by defeating his cousin Ceasar Mandela Malakun of Upko.

According to the KDCA website, there are several types of siga, depending on the way the cloth is folded.

For instance, there is the siga hinopung because it looks like a curled python (hopung in the Kadazandusun language).

In KOTA KINABALU, Fatimah Zainal reports that Leiking made it a point to wear the siga as it is part of the "traditional and national dress code" of Sabah.

"I wore it because I am a Kadazan who is proud to be serving the nation.

"I wish I could have worn more than just my headgear, and that I could have also worn my whole Kadazan costume," laughed Leiking.

M. Kulasegaran (pic) turned heads when he showed up in a black turban when he was sworn in as Human Resource Minister at Istana Negara on May 22.

From afar, it resembled the turban worn by Gobind Singh Deo, who was sworn in as Communications and Multimedia Minister. Turbans are common among Sikh men in Malaysia.

Kulasegaran, a Hindu Tamil, said: “It’s a thallapa or Tamil headgear, which was also worn by Tamil kings.”

He said the last time he wore it was during his wedding.

"It is part of Tamil culture," he said.

"Though not a Tamil king, Kulasegaran is a Cabinet member of a new Malaysia, and has more than earned his right to wear the thallapa," wrote an English daily.

He added that he was proud to be able to don the traditional headgear in recognition of his cultural heritage.

“It is important to insist that our culture lives,” he said. 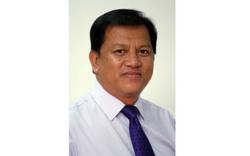