Human Resource Minister M.Kulasegaran giving the press conferencee after chairing with the private institute and manufacturers at Industrial Training Institute at jelapang.

PETALING JAYA: Human Resources Minister M. Kulasegaran (pic) said the Government has suspended the system currently in place for the recruitment of migrant workers from Bangladesh.

“This suspension will last until a full investigation has been completed into allegations that a syndicate was operating it as a human traf­ficking scheme to exploit these workers,” he told The Star yesterday.

He said the whole process was “a total mess” that had resulted in the migrant workers paying exorbitant amounts of money to several middlemen in both Bangladesh and Malaysia.

“The 10 companies, which are part of the syndicate involved in the recruitment process, have also been suspended.

“We are investigating this, and are in the process of fixing the problem.

“There have been discussions going on at various levels on the matter and I believe we will be able to find a solution soon,” he said.

Until then, Malaysia would go back to the old system so that the application process could be managed by the Government, he added. 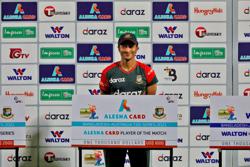