IT is getting tougher to treat severe infections in Malaysia, with bugs affecting patients becoming stronger against medicines.

This situation, known as antimicrobial resistance (AMR), is due to the overprescription of antibiotics to patients. It’s also because of the overuse of antibiotics in food production, particularly in the poultry, livestock and aquaculture industries.

This means that there is a 61% possibility that the given antibiotic would not be effective in patients receiving the treatment.

“The rapid emergence and spread of AMR present serious challenges in healthcare systems.

“It threatens the ability of antibiotics to effectively treat severe infections.

“This has become a matter of grave concern globally and Malaysia is not spared,” she tells Sunday Star, calling the situation worrying.

According to Dr Suraya, examples of such resilient bacteria are those that cause pneumonia, bloodstream infections, meningitis and even food poisoning.

The bug responsible for pneumonia, bloodstream infections and meningitis, known as A. baumannii, has become stronger – from a resistance rate of 49% in 2008 to 61% in 2016.

Another bacteria, streptococcus pneumoniae – the most common cause of community-acquired pneumonia – is now 31% resistant to erythromycin, one of the most widely used antibiotics in treating respiratory tract infections.

It also isn’t helping that some illnesses, which do not require antibiotics, are being treated with such medication.

“Most colds, sore throats, and coughs are commonly caused by viruses. Hence, there is no need for antibiotics as it is only effective against bacteria,” Dr Suraya says.

She urges patients to stop asking doctors to give them antibiotics when they may not be appropriate as this could lead to dire consequences.

Awareness is improving though, with more educated patients refraining from asking for antibiotics unless needed.

While the Government has awareness campaigns about antibiotic abuse, patients should also learn to ask doctors more about their illness and their treatment.

In February, a five-year Malaysian Action Plan on AMR (2017-2021) was launched to prevent the spread of drug-resistant infections in the country.

Jointly developed by agencies under the Health Ministry, Agriculture and Agro-Based Ministry, former Higher Education Ministry and other organisations, the plan aims to reduce national human consumption of antibiotics and the volume of antibiotic use in food production.

It was reported that an average of 700,000 deaths worldwide every year are linked to AMR.

“A common illness which led to CRE related deaths was blood stream infection, contributing almost 75% of the deaths.

On the food production front, examples of overly-used antibiotics in the sector are enthromycin and penicillin, which are basically to combat salmonella, reveals National Antimicrobial Resistance Committee member Datuk Dr Vincent Ng In Hooi.

However, it is difficult to check the overusage of antibiotics and more veterinarians are needed for this purpose.

“Veterinarians are in charge of choosing which antibiotics to use but there are not enough of us to monitor the entire situation.

“As a result, farmers use antibiotics based on their discretion, which may not necessarily be appropriate,” he notes.

Dr Ng, who is also Malaysian Association of Food Animal Veterinarians president, says most of the antibiotics used in food production are for chicken.

“The meat production industry is made up mainly of chicken and eggs (75%), followed by pork (20%), while the remaining 5% are others like beef and mutton,” he notes.

Acknowledging that it is a global problem, Dr Ng stresses that “knowing when, why and how” to use antibiotics is crucial.

In fisheries, AMR monitoring is relatively in its infancy and cannot be properly assessed.

Currently, there is also no register or list of permitted antibiotics to be used by aquaculturists in Malaysia. 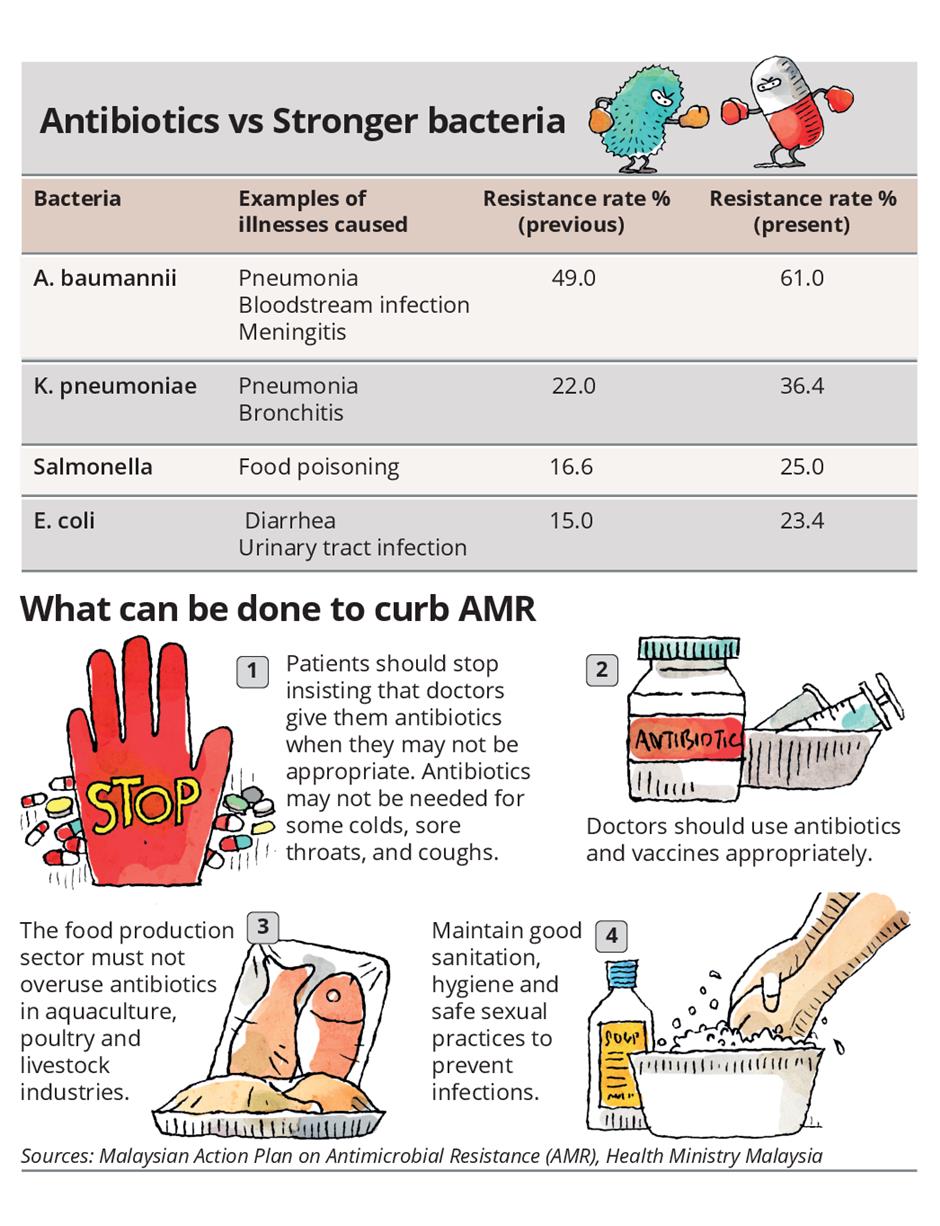