PUTRAJAYA: The new Parliament – the first under the Pakatan Harapan government – will convene on July 16 with the swearing-in of the MPs, followed by the King’s speech a day later.

Tun Dr Mahathir Mohamad said the Government will seek the consent of the Yang di-Pertuan Agong to convene the first parliament meeting of the 14th Dewan Rakyat on July 16, which will begin with the swearing-in of the MPs.

The new session will also see the election of the Speakers of the Dewan Rakyat and the Dewan Negara, said the Prime Minister.

“The opening ceremony and the King’s speech is set for July 17, and the sitting will be on for 20 days,” Dr Mahathir announced after chairing the weekly Cabinet meeting here.

Dr Mahathir said the main agenda of this parliamentary sitting will be to abolish the Goods and Services Tax (GST) as well as the Anti-Fake News Act.

“There will also be amendments to other laws which will be announced later,” he added.

On finalising the Cabinet line-up, Dr Mahathir said it could be completed by next week.

“I had expected it to be completed by this week but it could go on till next week.

“It could be 26 people, 27 people or even 500 people,” Dr Mahathir jokingly added, when asked about the size of the Cabinet.

On whether Sabah and Sarawak MPs are in the equation, Dr Mahathir replied: “All opinions are being considered, but just wait for the announcement.”

The Government has so far appointed only 13 Cabinet ministers.

On another matter, Dr Mahathir said the allocation for MPs will be disbursed before the Hari Raya Aidilfitri celebrations.

Opposition MPs, however, will be given a lower allocation.

“If the Pakatan Harapan MPs get RM200,000, the Opposition will get RM100,000,” Dr Mahathir replied when asked about the amount. 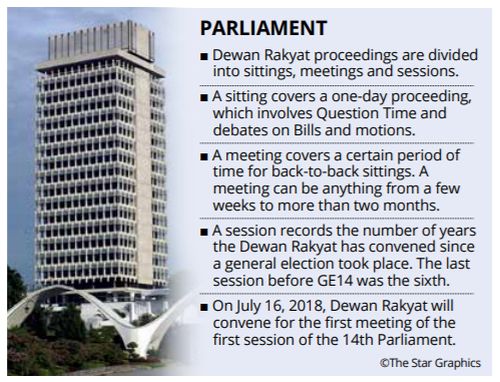