TV3 ordered to pay RM1.1mil for implying that Anwar was behind 2013 Lahad Datu incursion

File photo of Malaysian soldiers in action against Filipino militants during the Lahad Datu incursion in 2013.

KUALA LUMPUR: The High Court here has ordered local television station TV3 to pay RM1.1mil to Datuk Seri Anwar Ibrahim for accusing him of possibly being a mastermind of the Lahad Datu incursion by Filipino militants into Sabah just before the general election of 2013.
Justice Datuk Ahmad Zaidi Ibrahim held that TV3, as the second defendant, failed to practise responsible journalism in not getting a confirmation from Anwar before broadcasting the news.
“According to the defendant's witness, they reported the news based on a article from Utusan Malaysia. But the newspaper (itself) has admitted that the article was false and defamatory to the plaintiff.
“However, TV3 was adamant and did not make any settlement with the plaintiff,” he said.
Justice Ahmad made the ruling Monday (May 14) after allowing Anwar's suit against TV3 for disparaging him in its Buletin Utama based on a front page article published by Utusan Melayu under the heading, "Ketua Pembangkang dikaitkan dengan pencerobohan?" (Opposition leader linked to intrusion?) dated March 2, 2013.
The court ordered TV3 to pay general damages of RM600,00, aggravated damages of RM250,000, exemplary damages of RM250,000, and costs of RM40,000.
Former opposition leader Anwar Ibrahim had testified in the case that the TV3 report that linked him with the incursion by Filipino militants into Lahad Datu, Sabah was serious slander.
Anwar said the report injured his reputation as many people were confused and "poisoned" by the propaganda as it was close to the general election held in 2013.
“The report (made it look) as if I am a traitor to the country and am willing to allow the incursion into my own country. The report has tarnished my image and credibility as an opposition leader," he said then.
After considering the circumstances of the case, Justice Ahman found that the news report did implicate the plaintiff and said the RM600,000 general damages was reasonable.
On March 8, 2013, Anwar sued Utusan Melayu; Utusan group editor-in-chief Datuk Abdul Aziz Ishak; TV3; Media Prima Bhd News and Current Affairs, Radio and Television Network group managing editor Datuk Shaharudin Abd Latif; and Buletin Utama news editor Ing Boon Seng.
Anwar, in his statement of claim, referred to an article published by Utusan Melayu in its front page headlined, "Ketua Pembangkang dikaitkan dengan pencerobohan?" and another in page nine, "Tiga kumpulan menjadi dalang" (Three groups are the masterminds).
On Oct 5, 2016, he reached an agreement with Utusan Melayu and its editor-in-chief Datuk Abdul Aziz Ishak to settle the case.
Anwar was represented by counsel Datuk S. Ambiga while TV3's lawyer was Lim Qi Si.
Article type: metered
User Type: anonymous web
User Status:
Campaign ID: 46
Cxense type: free
User access status: 3 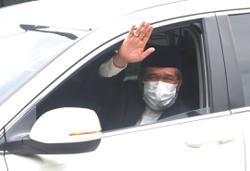