LONDON: As election fever reaches its peak in Malaysia, a rally was staged in Trafalgar Square here on Monday (May 7) by Bersih Global over what they claim are electoral discrepancies.

The Malaysian electoral watchdog organised the gathering of some thirty people to reinforce its call for a free and fair electoral process and to combat corruption.

Among the issues raised was the delay in receiving ballot papers for overseas postal voters for GE14.

Postgraduate student and lawyer Melissa Sasidaran, 32, said she had yet to receive her ballot papers.

"There are thousands of Malaysians overseas who are not able to vote because some have not received their ballot or the ballots are arriving late. Voting is a democratic right for everyone," said the Pasir Gudang constituent, expressing her anger at what she deemed was a denial of her right to vote.

Hazri, who is a Stampin voter, received his ballot papers on Friday and was able to hand it the Undi Rabu group, who are organising a mass delivery of ballot papers back to Malaysia.

"I am here to show solidarity with other Malaysians who are not able to vote," said Hazri.

Pensioner Teoh Hun Teng, 65, travelled from Kent to London to attend the gathering.

"I'm still Malaysian. We care about Malaysia. We want to go back. Especially me, who wants to retire peacefully in Malaysia," said the Bukit Bendera constituent who has been living in Britain for more than a decade.

Many registered overseas voters complained that they have not received their ballot papers or received them too late, making it impossible for their votes to reach Malaysia by the 5pm deadline on Wednesday.

Those who received their ballots on time also voiced out against the high cost of sending their votes home; with prices ranging from £24 to £80 (RM128 to RM428) for each ballot to be sent back to Malaysia.

Among those present at the protest was Sarawak Report editor Clare Rewcastle-Brown. 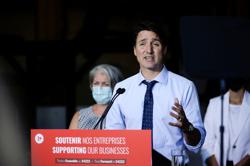