Marvel mania: The Avengers logo lighting up the top of Menara TM in Bangsar.

PETALING JAYA: Villains beware – the Avengers have set up their Malaysian “headquarters” at Men­ara Telekom.

On Tuesday night, Marvel Comics fans’ superhero fantasies came alive when Menara TM lit up the iconic Avengers logo at the top of the building, just like the fictional Stark Tower featured in the Marvel Cine­matic Universe.

The eye-catching display was a gambit for this week’s worldwide release of the highly- anticipated superhero movie Avengers: Infinity War.

Bearing an uncanny resemblance to Menara TM, Stark Tower is the residence of Tony Stark or Iron Man in the movies, played by Robert Downey Jr.

Stark Tower also doubled as the Avengers’ headquarters until the 2014 sequel Avengers: Age of Ultron.

“Hope Thanos (the Marvel villian) does not attack this tower, because Malaysians still need their Internet,” one amused netizen commented as photos of the tower went viral on social media.

Others wondered if the Avengers would be receiving Datukships soon.

The biggest question, however, was whether or not Malaysian superheroes like Keluang­man, Cicak­man and Badang would be chosen as the Avengers’ Malaysian representatives. 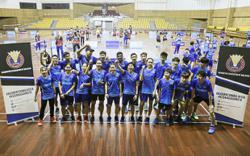