Businessman James Lee Yau Cheong has obtained an order from the Sessions Court for Dr Jeffrey to pay RM480,408.50 within seven days of the notice that was published in two local newspapers here yesterday.

The notice of bankruptcy that appeared in the New Sabah Times and Daily Express stated that he had seven days from April 24 to pay the amount to Lee based on a Session Court judgment on March 9, 2018.

The notice was issued to Datuk Dr Gapari Bin Katingan @ Geofrrey Kitingan, which is Dr Jeffrey’s name on his MyKad.

Dr Jeffrey, who is Sabah STAR president, was recently quoted as saying that he planned to contest in the Keningau parliamentary seat.

He is also moving from Bingkor to contest in the Tambunan state seat, which has been held by his brother Tan Sri Joseph Pairin Kitingan since 1976.

When contacted yesterday about the bankruptcy notice, Dr Jeffrey said he had asked his lawyers to take the necessary action to set aside the notice.

“I don’t believe it would affect my plans to contest in the elections.

“My lawyers are taking the necessary action.

“These sort of things happen before elections,” he said, adding that they were all set for the polls.

His lawyer Tengku Fuad Ahmad said they had applied to the court yesterday to set aside the default judgment and the bankruptcy notice.

“We believe that the court process has been deliberately misused and the timing of it, just before elections, is questionable,” he said, adding that the so-called debt claims in the first place were doubtful and were over 15 years old.

Sabah STAR is part of the four-­party Opposition coalition here called Gabungan Sabah that will be challenging Barisan Nasional. 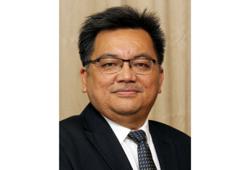