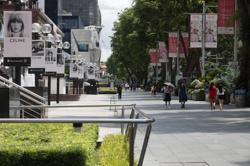 KUALA LUMPUR: Activist Wong Chin Huat says he is willing to pay the RM1,000 fine for breaking the embargo set by Parliament over the Election Commission's redelineation report.

Wong, who is a member of civil society group Engage, said he defied the Houses of Parliament (Privileges and Powers) Act 1952 by revealing the contents of the report before it is officially tabled in Parliament.

"It's an act of civil disobedience and I'm breaking the law, but Malaysians deserve to know what's going on," he said during a press conference at the Kuala Lumpur and Selangor Chinese Assembly Hall here on Tuesday (March 27).

The report will be tabled for first reading in Parliament on Wednesday (March 28). He said that he would go to Parliament and offer to pay the fine on Tuesday.

Wong, who has a doctorate from the University of Essex on electoral systems and whose authored reports on the subject matter have been consulted in court, had criticised the report, which was distributed to lawmakers last week. Lawmakers were not allowed to publish or distribute the report in any form until the embargo is lifted on Wednesday.

The motion, once debated and passed with a simple majority of 111 lawmakers in Parliament, will be gazetted upon receiving the Royal Assent.