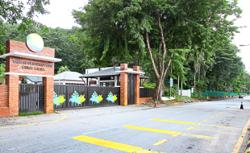 PETALING JAYA: Datuk Farid Kamil (pic) has pleaded not guilty at a magistrate's court here to a charge of fabricating evidence.

The actor, who appeared in the dock wearing a long sleeved shirt and dark pants, claimed trial to the charge before Magistrate Salamiah Salleh.

He was accused of fabricating evidence in a police report lodged at the Taman Tun Dr Ismail police station at 5.54pm on Jan 31.

The offence is punishable under Section 193 of the Code and an accused can be jailed for up to three years and be liable to a fine, if convicted.

DPP Mary Phoon suggested bail of RM6,000 but Farid's lawyer Faizul Mohd Nasir asked for a lower bail on grounds that his client has a wife, two children and elderly parents to care for.

"He is losing out on offers for acting, directing and advertising because of this case," Faizul said on Friday.

Magistrate Salamiah fixed bail at RM2,500 with one surety and set May 7 for mention.

Farid was arrested on Jan 11 for allegedly attacking a police officer and a civilian at the Kota Damansara traffic police station.

He claimed trial to the assault charge on Jan 16.

The actor was then charged on Jan 25 with self administering THC (Tetrahydrocannabinol), one of the active components in ganja.

Farid later lodged a report at the Taman Tun Dr Ismail police station alleging that a few individuals had spiked his drink with drugs prior to his altercation with the police in January.

Actor Farid Kamil to be charged with giving false evidence