He took to task Lim’s claim that it was not unusual that construction of a project started 10 years after the project was planned.

“That is not what Fadillah said. There is a big difference between when a project is planned and when it was awarded.

“Signed versus planned. Please know the difference,” he said.

See-To also lambasted Dr Ramasamy for claiming that the construction of both the first and second Penang bridges did not begin immediately after the signing of the agreements but after a gap or nearly 10 years.

See-To said the first Penang bridge was built entirely by the Malaysia Highway Authority – a government agency – and was completed and opened to the public in 1985 but he claimed the bridge was “mysteriously taken out of government ownership to be given and privatised to a private company by Tun Dr Mahathir Mohamad in 1993 when he was then Prime Minister.”

He added that the second Penang bridge agreement was signed with a wholly Finance Ministry-owned company Jambatan Kedua Sdn Bhd (JKSB), which was incorporated on July 9, 2008 and construction started in November that same year.

“In the Penang undersea tunnel case, the contract was awarded to a 100% private-owned company in 2013 with construction only to start in the year 2023,” said See-To.

Ti was referring to one of Dr Ramasamy’s opinion pieces on a news portal on Monday where he said that MCA and Gerakan were at fault for reducing Chinese Malay­sians to second or third class citizens.

Guan Eng hot under the collar over press’ knowledge 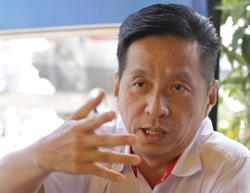