Secret stash: One of several pictures circulating on social media purportedly showing money found with some paper in a plastic bag among rubbish on the streets during the flood clean-up.

GEORGE TOWN: Gold and money were part of the things which were washed out when murky water invaded people’s homes.

Several photos showing these have been circulating and one of them even showed the hand and torso of someone wearing a shirt resembling that of a Seberang Prai Municipal Council (MPSP) worker holding an assortment of gold chains and bracelets, said to be found among the rubbish during the flood clean-up.

“We have not received any reports of gold or cash found in rubbish piles and our officers are keeping a close eye on this,” said MPSP president Datuk Rozali Mohamud yesterday.

He urged the public not to fear that MPSP would pocket such finds and have faith in the honesty of the local councils which do not have a finders keepers policy. 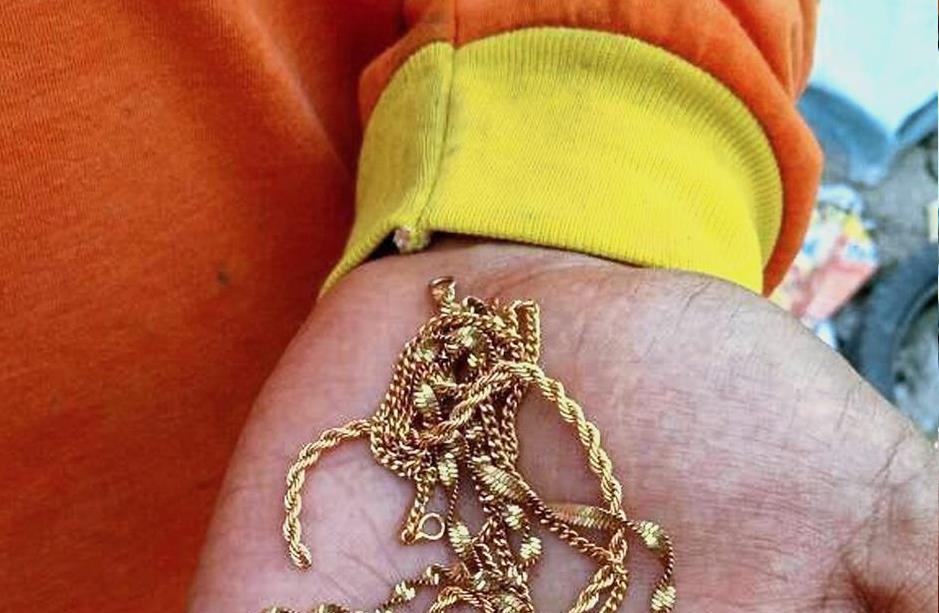 Shiny: Someone wearing a shirt resembling that of a Seberang Prai Municipal Council worker holding an assortment of gold chains and bracelets said to have been found among the rubbish during the flood clean-up.

“If we do, we will classify them as lost-and-found property and try to locate the owners. As a last resort, we will hand them over to the police,” he said.

Among the photos circulating include a supposed bundle of RM100 bills partially hidden by a torn piece of sodden paper egg carton among rubbish. An open empty wallet is beside it.

But on zooming in, a portion of the middle of the bundle was not blocked by the torn egg carton, showing that the bills were only half the actual length.