In her statement of claim, Siti Rosmizah named Ziela as the sole defendant.

She said Ziela had uploaded, published and publicised the defamatory words in her Instagram account, which has 551,000 followers, on Feb 9 and April 10.

Siti Rosmizah, who is also co-producer of popular drama series 7 Hari Mencintaiku, alleged that Ziela had also made defamatory statements when interviewed by a Mingguan Malaysia reporter on April 16.

The plaintiff alleged that the defamatory words meant or would mean that she was inhumane and cruel; a liar and dishonest person; bossy and selfish; without principles, unethical and without morals; a hypocrite; and had failed to keep her promise.

She said a letter of demand was sent to Ziela on April 18 seeking a retraction of the comments, an apology and damages as a result of the defamatory words but to no result.

Siti Rosmizah is seeking an order for Ziela to delete the defamatory statements from her Instagram account; an injunction to prevent her from publishing, publicising and/or spreading the statements; an apology; and special, general, exemplary and punitive damages. 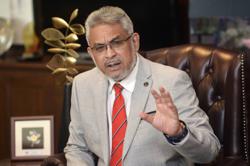