Abu Sayyaf kingpin among those killed in shootout Police shot dead three kidnappers, including Abraham, and arrested two others during a gunfight off Pulau Gaya in Semporna on Dec 8.

MANILA: Malaysia's security forces have dealt a serious blow to the notorious Abu Sayyaf group by killing the leader of a squad that has been snatching tourists, fishermen, and sailors in waters off Sabah and the Philippines' Sulu archipelago, Philippine officials said on Saturday.

Abraham Hamid, the alleged kingpin, were among the three men killed by police officers from Malaysia's Tiger Platoon in a shootout on Thursday evening off Sabah's Semporma town, the officials said.

"The death of Hamid is a big blow to the (Abu Sayyaf), as it neutralised one of the notorious bandits' leader and will degrade their capability for spotting and kidnapping victims in the future," Major Filemon Tan, spokesman of the Western Mindanao Command, said in a report.

The other two slain were Hamid's men, said Major Tan, without identifying the men.

He said Hamid led bandits that snatched two Canadians, a Norwegian and a Filipina from a high-end resort in Samal island, Davao province, 980km south of the capital Manila, in September last year (2015).

Filipina Maritess Flor, 40, was released in June, while Norwegian Kjartan Sekkingstad was freed in September after ransom was paid.

Major Tan tagged Hamid as a "spotter" who commanded a unit that prowled the porous borders separating Sabah and Sulu looking for victims that they would then hand over to bigger groups in the Abu Sayyaf's jungle strongholds in Sulu and Basilan islands.

He also confirmed earlier reports that two others - Samsung Aljan and Awal Hajal - had been arrested. There were two more reported missing, along with one hostage.

Hamid's group, using a blue, twin-engine, 80-horsepower speedboat, had pounced on two fishing trawlers on Thursday evening, taking one hostage from each boat.

They then approached a third unmarked vessel that turned out to be filled with policemen from Tiger Platoon.

The Abu Sayyaf has pledged allegiance to the Islamic State in Iraq and Syria (ISIS), which has recognised its chieftain Isnilon Hapilon as a "prince" of mujahideens.

Though the group officially has a separatist, Islamist agenda, it has become better known for banditry and tactics that have proved highly effective, and earned large sums of money.

Since March, Abu Sayyaf gunmen have been intercepting slow-moving tug boats towing coal barges in waters near the borders of Malaysia and the Philippines, taking captive more than a dozen Indonesian and Malaysian sailors. 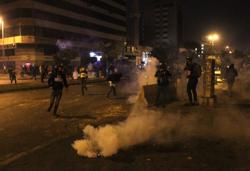